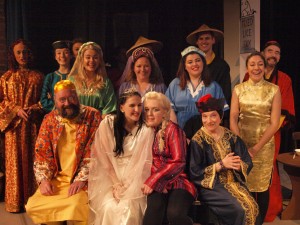 It’s that time of year again. Decorations down, Turkey finished, treeshredded. It must be time for the Shepperton Players panto. Oh no it isn’t! I hear you cry. This group are-known for their hard hitting dramas and adventurous and sometimes controversial plays and this years panto lived up to the bill.

Aladdin is one of this critics favourite shows. The much anticipated performance started with the band… Who were exceptional – so the first well done goes to the musical director or should I say directors Colin Lewis and Dave Doubble for putting together a wonderful 8 piece band supporting an interesting musical soirée. The song choice throughout the panto was top notch and each song brought levity to the evening. The overall of the direction of the panto suited the production but I feel at times the pace dipped. Pat and Eric Champion gave us a panto to remember I look forward to their next endeavour.

The show opens with the villain – evil, desperate Abanazer played by Ron Millinger. This role is pivotal to the success of the show and so Directors Pat and Eric Champion had to ensure they got it right. They did. Ron provided the audience with a great performance and ensured that he was disliked equally by all ages.  The boos where audible whenever he appeared which is exactly what you need from a villain. Well done Ron..

The beautiful and talented Belinda Doyle was outstanding in her role as spirit of the ring. The contrast between her posh Surrey genie and her Walford wannabe was a highlight. I would have liked to have seen more of the spirit of the ring and also the genie of the lamp. Peter Cornish was superb and made the best of this small part. His facial expressions though the layers of green paint and glitter where
comical.

Since we are mentioning humour lets talk about Lorna and Keith Doyle who quite frankly made a wonderful comedy double act as Emperor Chop Suey and Empress Dragona. This is an act they should consider to take on tour. Their daughter Princess Say Wen was portrayed by Carrie Millinger – who every little girl in the audience wanted to be. Her sweet nature and honest outlook was inspiring; her gowns where pretty, as was her singing, although perhaps a little high on occasion. The royal entourage was completed by Chow Mein (Richard Fordyce) and Prince Pekoe  (Jasmine Ella). Both made the best of the small parts.

Now to Widow Twankee.  The dame in any panto should be loud, obnoxious, big hair and loveable by all and yet again Pat and Eric got it spot on. Derek Stringer played a blinder, his ad libbing and audience interaction was comical genius and even his singing passed muster. He played the part perfectly and his transformation to glamour puss was outstanding. he got the moves down and the audience up (metaphorically). Widow Twankee was supported by her two sons. Wishee was beautifully executed by Louis Whittle who  had the thankless task of getting the audience involved. He took the part and made it his own – his enthusiasm was infectious and adorable. And Aladdin – this huge role  was taken on by Jenny Hazell who’s interpretation of the role was an interesting one. The lead role in panto should be fun, endearing and larger than life, &  this I am afraid is where this critic feels Jenny’s performance fell short. She tried to play this part straight and actually at times she looked as though she would rather be any where else. Panto is at it’s best when the cast are clearly enjoying themselves on stage, and Jenny for the most part looked uncomfortable. Jenny is a great actress but perhaps she should remain with the dramatic rather than comical.

However, comic relief was at hand with the incompetent police Bamboo & Typhoo (Sally Penman & Adam Polllington), although the dated script showed through here – I’m sure that anyone under the age of 30 would miss the reference in “You only get an oo with Typhoo”. Olwen Holme featured in two of the more memorable scenes, as Madame Flash Bang for the wedding photo and as the Mummy in the tomb. No panto would be complete without a good “Behind You!” routine.

The various members of the chorus, too numerous to name individually, also did sterling work in rounding out the ensemble pieces and keeping the entertainment flowing. I especially liked the ad lib of the chorus in the laundry scene, I am sure Mr Milliband would be proud of his bloomers!

The choreography of the dance routines was just right and the steps were well-sychronised, avoiding the common am-dram pitfall and accidental humour of the retired sergeant major being a beat behind the rest of the cast. So a very well done to Kathryn Hocking as I am sure that this was not an easy task but beautifully executed.

The sets overall did an excellent job of adding to the atmosphere without obstructing, although at least one set change was slightly too long and caused a noticeable pause in proceedings. The lighting and special effects also did a great job of adding to the atmosphere without being obtrusive. The most noticeable lighting effect was the illusion of the palace on the hill appearing and then disappearing, which worked well and was supported by credible panicked reactions from the cast. Follow-spots were used appropriately.

The costumes were just right. Bright & colourful and adding to the characters, especially Widow Twankey’s remarkable transformation from washer-woman to glamour girl. The script appeared slightly out-of-date in places, and in general slightly too long. Some judicious cuts to scenes which contained overly-repeated variations on the same joke – such as the football teams – would have helped to maintain the pace and to get the audience home before 11pm.

Overall, I think that this is a competent – but not excellent – panto from Shepperton Players. The target audience and the ultimate arbiter is of course the children, and this production was strong on entertainment value, but I  would hope to see a more consistent production for their next outing – “They call it murder”.