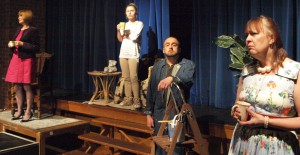 Thank you to Shepperton Players for another evening of enjoyable theatre and congratulations to all involved for putting on four very different but equally pleasing pieces of drama. I felt that the evening was well put together and I enjoyed the contrast between the four pieces. They all engaged well with the audience and it was lovely to see the rest of the audience enjoying themselves as much as I did.

The Visitor, written and directed by Geoff Buckingham

Due to traffic caused by the Hampton Court Flower Show, I only caught the end of this sketch, so can’t comment on it fully. From the little I did see, I thought it a confident performance by Dawn Bradley and an interesting idea that had echoes of the Carry On films from the 1960s/1970s in a script by Geoff. I also thought the Casualty theme tune music at the end was a nice touch.

Happy Together, written and directed by Geoff Buckingham

A slightly cynical but witty take on married life saw Olwen Holme and Robert Hardy take on two characters that while married, did not listen or were even seemingly aware of each other. I thought the writing was amusing and up-to-date using references that everyone in the audience would know and be comfortable with. Olwen and Robert were both fast-paced and clear in their delivery, both clearly comfortable in their characters. A great idea that I would have liked to see developed further, perhaps as part of a longer piece of drama. I particularly liked Olwen’s onesie!

An altogether different piece of theatre, the scene was immediately set by the eerie music that illustrated that this was going to be completely different to what had just been presented. Although a rehearsed reading, I was impressed by what unfolded in front of me. Sophie Tame as the narrator, relentlessly telling of the horror story, was creepy and spine-chilling, gave the story gravitas and was effective in her approach. I liked the blue light that cast an eerie presence on her when she revealed the tale. Although scripts were in front of all cast members I did not find it stilted in the least. Although all the performances were good, I think Katharine Lewis as the emotional and desperate Eve and Robert Johnson’s Herbert, who incredulous disbelief turned to horror, are both noteworthy. I think that with further rehearsal this adaptation would be worth a second watch.

I was very impressed by Carrie Millinger’s directorial debut and very much enjoyed being an audience member for this one act play.

Before the play even began, I liked the use of props and setting and interesting the stage was not used in its entirety and was set, instead, in front of curtain. I liked the fact the stage remained the same throughout and instead the lights used to place emphasis on the characters. The set only served to illustrate how different the three female characters were, the working class housewife Amy, the ‘tv star’ Holly and the single teacher Irene, who in their own way were all looking for a man to fill a void in their lives. The different set-ups and costumes highlighted how different these women were and their differences in social standing.

I enjoyed all three performances for different reasons and could see that the cast members really got their teeth into their roles, which were very believable. The stand-out performance for me was Anne Wheeldon’s interpretation of the snobby, egotistical but ultimately, emotionally frail, Holly. Although she made me laugh at times, I really had sympathy for the character towards the end of the play. I also liked Billy Reynolds’ performance as Him, he left me unsure whether he was indeed manipulating these women or if they were, in fact, misinterpreting their relationship with the handy man, who really had the measure of the three females characters. I also liked his portrayals of the various other men in the characters’ lives, by donning a coat he became a different character all together.

An occasional prompt was needed but actors stayed in character throughout despite having to stay on stage throughout and I thought that all three women engaged with the audience, particularly Shayla Ash’s Amy, who performed her part with panache. I thought that Susan Ford had her part down to a tee and was certainly the character that the audience empathised with the most.

It was an interesting play, sometimes funny and other times thoughtful, and one I had never heard of before but one I very much enjoyed.