And a Nightingale Sang by C.P.Taylor: October 2009 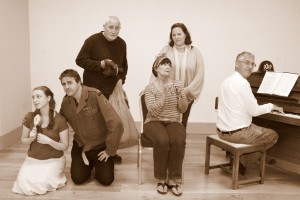 This play has travelled far in both place and time: set in Newcastle-on-Tyne in the 1940s, written and first produced there in 1973, transferred to London in 1979, and now, in 2009, scene-shifted to Hull and brought to Sunbury.  And it has travelledwell, thanks to the skill of the writing and the talents of the Shepperton Players.

The set made excellent use of the limited space available, centred as it was on a well-realised kitchen/dining room of the period with a half partitioned scullery and a corner which doubled up as a bedroom dressing table. Then the space in front of this set became many other things, and one of the delights is how characters could go out of the ‘door’ at the back of the kitchen only to re-appear from the wings after a few moments to arrive at a park bench, dance hall, air raid shelter, hotel room etc, the exact setting depending, as it does in Shakespeare, on the language of the play and the imagination of the audience.

The greatest initial impact came from the shallow, sentimental, superstitious, flighty, indecisive Joyce Stott (Helen Doyle), her of the incisive make-up and terrifying 1940s hairdo. “Stop being in a picture” says her sister, for this indeed is where Joyce seems to imagine herself, playing a part in some romantic Hollywood film. In the opening scenes she nearly stole the show, and although her role became less central as the play went on, her impressive range of facial expressions was there whenever called upon: utter terror at an air raid, recoil from the thought of sex with her husband, disgust at the offer of pink French knickers, fear when she thought she was pregnant, panic when she discovered that her husband was not the father. But the most memorable moment came when she learnt that her ‘perfect’ sister was going to live in sin, whereupon she stood, arms firmly folded, half looking away, with her face expressing in quick succession – and sometimes even simultaneously – dismay, wry amusement, unaccustomed primness, disapproval, moral superiority, mischief, and delight. Joyce is in many respects her mother’s daughter; just wait a couple of decades or so. For this actress, her face will be her stage fortune. Joyce remained the same from beginning to end, as did this excellent performance.

Joyce’s sister Helen (Emma Dow) has a more complex role.Firstly, it has a pivotal role: as narrator she holds the play together, while as central character she holds the Stott family together – for as long as she can. This required Emma to slip in and out of frame which she achieved smoothly (as she had as Cook/Narrator in The Canterbury Tales).Secondly, it called for a development in both the character and our reaction to her, and Emma paced theses changes with skill. The only element which might have been paced more convincingly was her lameness. Even allowing for “a bad day for my ankle” and the assertion that it worsened under stress, the degree of lameness varied rather more erratically than it should, especially in the opening scenes where there was little evidence for her family nickname ‘the cripple’.

Whereas Joyce ‘tries on’ emotions for fit Helen’s feelings are obviously authentic throughout and it is this which moves us. She clearly cares about all members of the Stott family, who she describes as “all sort of stuck there”, and is forever trying to smooth things over Her own low self-image is convincing: “I felt really funny, and awkward, and ugly, and a mess” she says as she sets out on her first sort-of-date with Norman, at which her body language is indeed gawky. But then came “he held my hand!” and she was suddenly a picture of surprised delight. Next came the astonished rapture when she found she could dance after all – and Helen warned our hearts.  Later, in a daring breach of frame,  she looked straight out at the audience with a mischievous grin as if to say “look what I’ve done” (and was that a wink?) as she told the hotel landlady “Yes, we’re married”. Emma made us care so much for Helen that when we discovered that Norman was far from the “straightforward chap” he called himself, I for one could have wept for her: another tiny and only too typical tragedy of war. This play has been called ‘bitter–sweet’, but at least this most bitter bit is finally made more palatable by Helen’s realisation “Now I know I deserve somebody worthwhile”.  Helen, unlike her sister, has gone on a journey of growth, one which Emma led us to follow: a performance of substance.

It is difficult to see how these two girls could be daughters of the same mother, Peggy Stott, played by Gill Lambourn (Was this really the same Gill Lambourn who played Hecuba in the Euripides? What a range!). Here is a neurotic and manic version of Nellie Bosworth played by Jean Boht in Carla Laine’s 1980s sitcom ‘Bread’. Peggy, not her husband, is supposedly the head of this household, but who even in their right minds could hold together such a disparate collection of individuals? All are lost in their individual obsessions: Joyce in her fantasy Hollywood, George in his piano and later his Communism, Grandfather in his dead whippet and precious cat. Certainly not someone with their own obsession, one even more extreme than the rest, a woman trapped in a form of religious mania. Here, like that of Helen, is a role requiring, and receiving in full measure, development over time.  Initially merely shrill, quirky, and mildly hilarious, Peggy’s mania grows with events: guilt with sinful thoughts when the Priest touches the back of her hand, guilt that it is her failure in due observance which caused the air raid, and the bomb which deliberately picked out her husband (or so she thought), and even the War itself. As the mania grew and took over, Gill paced the descent into panic, desperation, freneticism, and near-incoherence. A tour-de-force indeed.

Her much put-upon husband George (Peter Smith) impressed at first with his piano playing and then (when realisation slowly dawned) with his skilful miming of piano playing (though I wondered whether a slightly out-of-tune piano, or one with a few broken strings, might have fitted the place and time rather better (piano tuners and repairers being in short supply in the War – and expensive for a family like this). I would have wished his own obsession – with the piano – to have come over more clearly, and his later position on the Shop Stewards Committee to be more believable in such a mild-mannered man. But where this performance scored is when George officiously and comically tried out his Warden’s authority on poor grandfather with his cat. Here was a jobsworth of a man par excellence.

Grandfather Andie, played by Steve Lewis (one time Igor in Carpe Jugulum) as a lugubrious pessimist, was a delight from beginning to end, providing much of the light relief, a script which Steve delivered to our maximum delight.  “Dying is not as deadly as people think” he intoned. And his account of the deaf widow he planned to marry is, in the lightest sense of the word, wicked. Here was a comic counterpart to King Lear, both being passed from one reluctant sister to another and both asking ‘what is man?’ The tragic Lear, stripped of everything on the heath, concluded that man adds up to nothing, while the comic Andie came up with the priceless-seeming nonsense that “people are not human beings”, a statement which Steve uttered with solemn weight, and which, in the context of the total war then being waged, contains a nugget of wisdom worthy of Lear’s Fool.

This, then, is the Stott family into which the military intrude at their peril, and under the fluent direction of Diana Denton-Baker the cast convincingly realise the strange family dynamics in which typically members do not so much talk with each other asat, across, and against each other. Nobody seems to listen. The faulty communication reminds me at various points of Beckett, Pinter, and Alan Ayckbourn. This is a family which would probably, these days, be described as dysfunctional, though for better or worse they are all in it together for the Duration of the War (where there is a common enemy, albeit one often less troubling than folk among their own number and visiting soldiery). The play is punctuated by the progress of the actual War, by the popular songs of the day (well performed by the cast), and by that great wartime morale-booster ‘cups of tea’ the provision or promise of which are wittily highlighted by the cast. It is also punctuated by something which suggests that real affection exists, and that is the very telling and typically British denial of any such thing: any attempt at emotional closeness between members of the family or their guests is met again and again with the phrase ‘Don’t be daft’ – most effectively when George makes a move towards his wife. Here the acting underlines the deeper meaning of the words.

And so to the suitors, starting with Eric (Chris Pavlou). The script itself gives few clues to Eric’s inner world, but his actions themselves speak volumes about his motivation and character. Here is a man insensitive enough to get a ring ‘from a tart’ let alone to tell Joyce that’s where he got it. Chris showed this insensitivity; all the frustrated patience of a man desperate for a bit of sex before a lot of death; the judgement which could even begin to see Joyce as good wife material; the fecklessness which could lose a rifle (least of all in a ‘bog’); and the type of weakness which can only express anger in a torrent of uncouth language like that with which he eventually assaults Peggy’s ears. That was when we saw most of Eric, and Chris exploited this to the dramatic full.

Howard Tame(remembered as Verence II in Carpe Jugulum) played the other suitor Norman with a marvellous Brummie accent to contrast with the Yorkshire accents which other members of the cast managed more successfully than they might have the original Geordie). He brought an open face which made Helen – and probably us – believe his story of being a straightforward sort of bloke, albeit none too bright. His later prevarication and confessions came over as a sign not so much of evil intent but of weakness at a time of quick passions, imagined romances, and painful betrayals. This was an intelligent and measured performance. Poor Helen.

All the performances were enhanced with good costumes and props courtesy of Pat Champion, Chantal Suppanee and Pauline Hutton and also with excellent lighting and sound from Richard Smith and Jonathan Millinger.

Overall, the play itself is brilliant, not least of all how it undercuts and domesticates aspects of the War with some well-realised moments of black humour such as the whistle of a bomb turning out to be the whistle of the scullery kettle, George’s playing of the Last Post not on a bugle but on a mouth organ,  the use of a lifesaving baby respirator for a cat, and Norman’s anguished question following his admission that he was married only to be met with Helen’s pragmatic ‘I’ve brought some ginger beer’. Shepperton Players brought to this play a performance of a high standard under a direction which was fine both in overall structure and in tiny detail (such as changing the Geordie ‘netty’ to the common ‘bog’).  Well done all round.