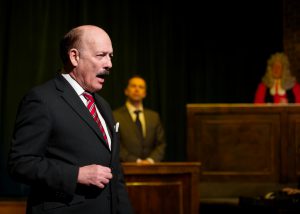 Thanks Howard for asking me to review this production – a play I didn’t know, which is always fun. The idea of making the foyer part of the whole courtroom setting was interesting and worked well and it was a nice touch to have the front of house staff,  led by the suitably efficient but friendly Doris, also in character. It’s amazing how quickly the audience took to being “in court” standing when instructed by Richard and frequently referring to their “jury bundle” throughout the proceedings. Exactly what Marion would have wished for I’m sure, so well done everyone!

Speaking of the “bundle” all the relevant documents had been realistically created by Marion. Caroline Button did exactly what is required of a props person, every property used during the performance was correct and in the right place at the right time thank you. The courtroom was well created too, using all the available space and again drawing the audience into the action. I particularly liked appearance of the various wooden stands, nicely done – as I was fairly near the front I had an excellent view of all concerned, it may be that those further back had minor difficulty viewing actors on the flat but as all were standing up when speaking I imagine this wouldn’t have proven too problematic.

The minor roles; the prison officer, the Court Usher and Clerk, Mrs Cole the prosecutor’s assistant were all well realised and the actors maintained character well – it’s so easy to drift off when faced with long periods of just sitting around with no lines. I congratulated her on the night but do want again to make special mention of Carrie’s consistent and realistic portrayal of the stenographer, she never lost focus or rhythm – not easy so good one Carrie.

The various witnesses all played their parts convincingly, Howard I know is too busy with work and family presently to undertake major roles but I would really like to see him in a part that stretches his talent again before too long…I look forward to seeing him in the spotlight again. But his detective was fine, confident with his facts but with a nice underlying humour, he reminded me somewhat of one of the New Tricks brigade! – a compliment Howard.  Guy Shirley as Dr Weedon was a new face for me and he gave a competent performance in what I gather was his first. He should certainly continue and develop his ability in parts where he has to add movement, action and reaction, but this was a good place to start, not too many things to take on in one go. Having spoken to him afterwards I know he enjoyed the experience so onward and upward Guy.  Peter Smith, Natalie and Ron opened their accounts on the witness stand and cross examining but all had plenty more to do later so I’ll simply say that they were all convincing. Eric the judge was not simply there to add a splash of colour as he said in the bar later, but gave a nicely rounded performance, listening to all fairly but aware that he ruled proceedings. The part suited you Eric a nice man taking his responsibility seriously!

So now, to the two main protagonists, Anthony Blair-Booth (interesting choice of names from Mr Archer!!) and Sir David Metcalfe.  For me Peter Cornish was the star of this production even though his part was entirely confined to the first act. He took to his character as intelligent, slightly bombastic and very knowledgeable QC to the manor born and carried it off perfectly. The age discrepancy which came to our notice in the second act was irrelevant and I understand entirely that directors of amateur theatre don’t have the luxury of limiting their selection to those who are exactly the right age or appearance required by the script. His movement was just right not persistent pacing but plenty of pausing, addressing and drawing we the jury, into his thinking with a pace and clarity of understanding that ensured we never got lost in the details of the case. Well done Peter, by far the best thing I’ve seen you do.

Chris Butler was making his debut for S.P but unlike Guy Shirley comes with a wealth of experience. In Act 1 his role moved from being in the dock to cross examination. Overall I preferred his being in the dock as I found his frequent movement across the stage a little too repetitive. However his character was well developed and we were certainly convinced that he was in full control of the situation and his role in proceedings.  His interaction with Natalie in this act was powerful and set the scene and our attitude to the later action very well.

As we reached the interval. I found the whole thing entirely engrossing and along with the rest of the audience was eager to return an learn the truth. Act 2 proved a surprise in many ways both good and not so good. The not so good was down to the writing rather than the performing I hasten to add. We returned to find ourselves in Sir David’s elegant and beautiful home. Ron the set was a triumph.

The first scene took us back several months to give us a flavour of Sir David’s standing as a QC, his friendships with his colleague Robert Pierson (Peter Smith) and his old family friend and doctor Lionel Hamilton (Ron Millinger) and  the attitude he had towards the “trusted” Mrs Rogers as well as introducing us to the sad victim of the case his wife Lady Metcalfe (Vicky Price). The scene was well played by all and did indeed fill in some gaps but for me was slightly irritating since I’d got so involved in what happened on “the night in question” that I wasn’t really interested to hear the jolly details of his wife’s choice of post trial celebration meals or their views regarding Blair- Booth which may have been totally relevant in Archer’s eyes but not entirely necessary to mine. However, it gave the actors a chance to round out their characters and they did this to good effect. Vicky did an excellent job with the physical side of her performance and her accent was perfect for the part. The cameraderie  between them all was obvious and they produced a nice atmosphere of longstanding friendship. This was offset against the tension in the relationship between Sir David and Mrs Rogers. Natalie gave us a housekeeper full of deference but with an underlying attitude – (if you’d been able to get a licence or could in future, she’s be an excellent Mrs Danvers in Rebecca) and rest assured Nat you looked slim and very un-pregnant – (congrats and hope it goes smoothly by the way) In truth I felt the author had given very slim grounds for the actors to create a genuine antipathy but she and Chris Butler did their best with the material provided.

At last we arrived at the fateful night and it was in their final scene together that Chris and Vicky produced their best work of the evening. Until then I hadn’t been totally convinced by them as a couple in love – there were plenty of endearments and displays of handholding etc but for me it could easily have been false – perhaps that’s what Jeffrey wanted us to think? But in the emotional final scene where the tablet was actually delivered and taken I really did feel a spark between them. It also neatly demonstrated how the truth (as seen my Mrs Rogers) was absolutely not.

I have to admit that by the time we got to the last scene and discovered just what a clever, honest and caring man Sir David was, the play had slightly over run my attention span – my apologies and again I blame the author not the actors or director. Of course in terms of ethical and legal niceties it tied up all the ends satisfactorily but I was already thinking Jeffrey you’ve gone on too long. The interplay of the recorded evidence between scenes was good and useful as a reminder and to hold our attention during what were very slick scene changes – nicely done stage management team.  The lighting and sound were appropriate and as ever Stephen and Rachel didn’t put an operating step wrong. I thought perhaps that the lighting effects for the actual death could have been more subtle but overall John Hart did his usual fine job.

This was very much a play of two halves and I think the first half was by far the better written and constructed than the second – on reflection I would have loved to see the courtroom the basis throughout with the home scenes being interspersed as flashback snippets. This again is me being at odds with Mr Archer’s play construction (I think the only one he’s written directly for the stage rather than as a book) so is entirely unrelated to your interpretation and performances. Marion had grown as a director and now has a sure hand and delivers good stage pictures and movement. Both sets were terrific and all technical and backstage work was of the high standard I expected and the costumes were totally correct and suitable. The performances too were all worthy o f praise although I was disappointed on the night I attended to hear so many prompts towards the end of the piece which slowed it down and of course meant the atmosphere dropped away at these times. A real shame – it was a wordy piece and the Dylan Thomas was beautifully done (quite why he put it all in when the play was already very long I’ve no idea) but being absolutely slick with the words is a basic requirement I’m afraid. I’m hoping very much that I just caught an off night.

Please don’t take this as a negative review I thought you did a great job with a play that had a good story, an unexpected twist, interesting characters and plenty of tension but for me an evening where Act 2 didn’t quite live up to the promise of Act 1. Only my opinion though so feel free to disagree. I’ll be there for the next one as ever and if anyone wants to come and be totally derogatory about productions down here I’d me happy to take it! Floreat Shepperton Players….felt it appropriate to end with Latin in court!

P.S. Loved the dedication to Emma, she was such a star.