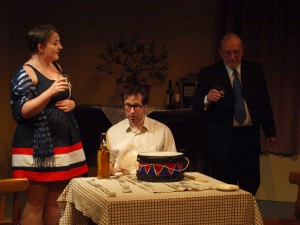 The Shepperton Players treated us to a fluent, brilliantly cast, and intelligent production of this remarkable and difficult play.

The set faithfully followed that prescribed by the author. The Director, Steve Lewis, had a choice between the dull dinginess of a boarding house of the 1950s and the bright stage lighting needed to appreciate all the nuances of the acting, wisely opting for the latter, and ably supported by the lighting designer and operator.

The first actor to appear, Roland Fahey, made a very convincing Petey, a solid and somewhat stolid figure who opts out of much of the action by heading out to his job as a deck-chair attendant. The moment we met Meg we realised that this man is in no sense ‘head of the household’. He was more than reasonably patient, and only slightly tetchy, in the inconsequential breakfast exchanges with Meg which included some absurd questions which, however innocuous, prefigured the even more absurd question which, with truly evil intent, the men in black would later use to torment the lodger.

It is difficult to imagine a better portrayal of Meg than that of Gill Lambourn. We saw first her dowdy, shapeless, mid-1950s, housewifely clothes (only one example of the excellent work of Chantal Suppanee who was responsible for costumes). Then came the little-girl voice which, despite some echoes of Frank Spenser’s wife Betty, Irene Handl, and even Pam Ayres, proved one which Gill quickly made all her own – or rather Meg’s. Then came the movement, that of a woman ill at ease in her own body, one minute awkwardly jerky, the next minute hovering uneasily and sometimes inappropriately.

What holds this character together? – starting off as a seemingly dutiful housewife; then becoming all-mumsy to her lodger; next suggestively sexual towards him with hints of what might be happening when she takes him tea in bed, and with her insistence on reading a sexual dimension to the word ‘succulent’; finally becoming a little girl herself with her childish delight in the idea of paying Blind Man’s Buff (still awkward in a party dress inappropriate for the occasion). In fact Gill did hold all these sides together into a convincing whole, a slightly simple and decidedly neurotic woman past her prime. A weak woman too, one who, like may weak people, can suddenly burst out uncontrollably, as she did at mention of a wheelbarrow. Gill made much of this reference, aware that it is an important piece of foreshadowing.

Meg is a very important character in the play, but the central character is the lodger Stanley played faultlessly by Howard Tame. Here is another weak character who can suddenly burst out in fury, and here is another actor who can highlight an important piece of foreshadowing by his slow and careful removal and polishing of his spectacles, revealing how short-sighted he is without them. He is a born victim.

His outfits (thank you Chantal) were exactly right for a person close to being a nonentity, a man half-living between fantasy pasts and a fantasy future, with even a fantasy present thrown in when it might be useful – such as claiming to be the Manager of this Boarding House (soon after denying that it is a Boarding House at all).

I cannot help wondering if Howard has researched such characters in psychiatric units. I have encountered such patients – often described as sociopaths, or as suffering from personality disorders. In this role Howard has certainly got them to a T.

Stanley has only a shaky sense of self and it would take little to undermine or destroy even that. And when McCann and Goldberg appear to do their “job” on him he is soon like a rabbit caught in a car’s headlights – or in this case the torchlight. As Stanley slipped into incoherence Howard could still give him some skilful body language, as in the languid and puzzled half-lifting of the head at the mention of Basingstoke. His final arrival in a catatonic state, and ultimately into the anguished howl of some wild animal, were portrayed terrifyingly well.

This takes me to Goldberg and McCann, entering (thank you Director and Chantal) in black suits like undertakers – which is what, in a sense, they are. Each of these, like other characters here, lacks convincing identities. Is McCann really a recently defrocked priest? This hardly fits with the violence in which he demands that Stanley confess. Was Goldberg really once an apprentice vet? Surely such a person would not treat even an animal as cruelly as he treats Stanley, reducing him to little more than an animal himself. Alistair Ross gave McCann an utterly convincing Irish accent. His obsessive tearing of newspaper into strips was worryingly neurotic. His capacity for menacing stillness, and his sudden movements to cut off Stanley’s escapes, were handled really well. His sudden extreme violence when it came was by then half expected. Clive Tibbits as Goldberg read typically Jewish sentence structure into – or imposed it upon – many of his lines in a way which I had not detected when simply reading the script. Together they provided the mood of menace which came to dominate the play. Their quick-fire interrogation of Stanley was simply lethal. I was reminded of the Soviet show trials, the Spanish Inquisition, and Kafka, in the way no explicit charges were set out, and no time given for the defendant to reply. Poor, poor, Stanley.

I round off this survey of the cast with Sophie Tame, who delighted us with her performance as the Fairy Godmother Glynis in Sleeping Beauty, and was now cast as Lulu. This is not a part with anywhere near as much for an actor to get her teeth into as the major parts in The Birthday Party. But when Sophie got her chance, right at the end, she seized it with both hands, roundly berating Goldberg for ‘taking advantage’ of her – after we had seen her the previous evening throwing herself, literally and substantially, upon him!

This sudden opportunity at the end takes me back to where I started this review, to Roland Fahey’s Petey. He, too, has his big moment right at the end and seized it memorably. This is when he suddenly realised – or at least sensed – the gravity of the situation, and shouted at Goldberg and McCann “Leave him alone”, then to Stanley “Don’t let them tell you what to do”.

Steve Lewis as Director paced the play very well, allowing – encouraging perhaps – a relaxed slow start which established a kind of everyday domestic life, and which gave every chance for the main characters to establish themselves with the audience. It was like a powerful engine building up steam, and by the end hurtling to destruction. Steve certainly drew the best out of this very strong cast, and drew out what I regard as – in technical critical jargon – the ‘Controlling Idea’, which in this play is the unreliability and fragility of identity, whether it being the conflicting elements of selfhood within Meg, the shifting (shifty even) pasts (and even names) of other central characters, or the dismantling and destruction on stage of the Stanley’s very being, almost as terrifying in an emotional sense as the physical putting out of Gloucester’s eyes in King Lear.

All who participated in The Birthday Party can – if they are inclined to do so – rest on the laurels they richly deserve for this memorable production.