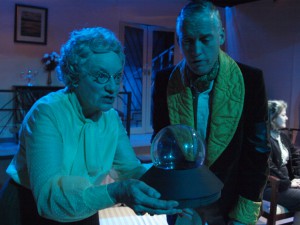 After being invited to review Shepperton Players’ latest performance, Blithe Spirit by Noel Coward, I am pleased to say that I very much enjoyed my experience of a well-acted, well-directed play in which I laughed out loud on several occasions. I believe I was joined by my fellow audience members in this view as the whole audience seemed engaged with the performance throughout.

The set, props and costumes looked great and were in keeping with the tone of the play. I was particularly impressed with the special effects throughout, a highlight being the wind blowing through the windows, and at the end, when the ghostly apparitions really made themselves know with props sent flying and furniture falling. Praise really must go to Ron Millinger and the society for the set design and construction.

I thought the costumes were really authentic and a lot of work obviously went into the costume design of all the characters from the dinner dresses to Elvira’s ghostly apparel. The lighting, although relatively simple, was extremely effective and subtle, so much so that when the lights dimmed when Elvira appeared it seemed natural.

Marion Millinger’s adaption of the play was certainly a successful one. I have only praise for her direction of the performance and have to say her dedication and hard work certainly shone through. She made Noel Coward’s 1940s play seem completely relevant to a modern-day audience.

Now to our actors. Although an occasional prompt was needed, I thought the small cast pulled out all the stops to learn and understand, what is a very wordy script. I enjoyed Peter Smith’s role as Charles Condomine and he certainly played the role of a man stuck between two wives from beyond the grave with panache. His exchanges with Ruth and Elvira, when Ruth did not know Elvira was even present, was a highlight of the play.

Vicki Prince as Ruth was a great casting choice. She adapted Coward’s words well and truly captured the spirit of Ruth’s character. Her interactions with Elvira were really great, speaking and interacting with someone who you aren’t supposed to be able to see is pretty hard and I commend her for that.

Natalie as the ghostly Elvira entered at the climax of the play and I think that her interactions with the other characters (must of whom were not supposed to see her) were really excellent. She made the temperamental and spoilt Elvira truly her own.

Kirstin Dick in the small but pivotal role of Edith was another great casting choice. Her physical comedy and repetitions at the beginning of the play certainly helped set the play up at the beginning. I also enjoyed Ron and Amanda’s performances as Dr and Mrs Bradman. Although playing a married couple, they highlighted the differences between the two, the excitable Mrs Bradman and her upper-class sceptic husband really added a certain something to the play. The scene where they were at the séance with the Condomines was particularly good.

Last, but most certainly not least, Lorna Doyle’s performance as Madam Arcarti was nothing short of hilarious. She was truly born to play the role and stole every scene she was in. Her interpretation of the eccentric but well-meaning medium was immediately embraced by the audience. Her high-energy performance was wonderful to see.

Congratulations to all the cast and crew on an amusing and entertaining interpretation of a classic play.