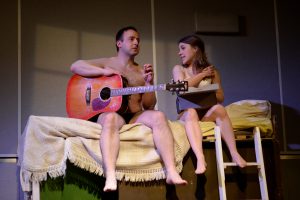 The set was built to be very ‘rough and ready’ as would befit a blind man on a limited budget living in central New York, and was furnished in a similarly shabby and haphazard way. As Don explains “some came with the apartment and some was bought from the junk shop.” This presumably makes for an easy brief for the set builder, but the set was done well, and the central positioning of the raised bed is important.

The play is set in 1960’s New York. There are numerous references in the script to pin down both the place and the time, so the director wisely chose to keep both of these as intended by the author rather than try to transpose to, for instance, present day London.

However, the set dressing and props jarred slightly as there were goods in Don’s apartment which had no business being in 1960s New York. Crunchy Nut Corn Flakes in particular was prominently on display. I know that obtaining authentically 1960s American breakfast cereal is a challenge, but I felt that hiding the worst offenders would have been easy, and a couple of bottles of Budweiser would have been easy to obtain and more credible. One very nice touch was the spray of scent immediately preceding Mrs Baker’s appearance. This is mentioned as being the way that Don can tell that his mother is approaching, and we the audience got to share his sense of smell, and associate the perfume with the personality.

Turning the theatre around so that what is normally the side wall of the theatre at RAC became the back wall raised a few logistical challenges.

One of these – the sound – was managed seamlessly. I had been expecting sound to come from what is normally the stage, in other words all the sound from stage right in Don’s living room, but in fact it was balanced, so presumably something clever happened somewhere that nobody noticed.

The sound was appropriate and not imposing. The guitar playing overlaid Don’s guitar and I imagine was difficult to synchronise, but was handled well.

The logistics of lighting was more difficult because the lighting bars, hung to be parallel to the stage front, are now perpendicular to our set, which means that each light hung on a bar will cast a shadow. This again was dealt with effectively, although it did mean that there was a light which was pointing directly down onto the actors, which cast some unnatural shadows on faces. This slight quibble aside, the technical aspects were handled very well, and the lighting was suitably unobtrusive.

There was a limitation around the seating layout which was harder to overcome. The close proximity to the stage meant that we shared Don’s apartment and were right there for the drama, of which more later, but the limited capacity meant that there were seats wrapped around almost 180degrees of the acting space and some of the seats had a quite restricted view. Perhaps more care needs to be taken when performing in the round, to make sure that all of the audience are involved rather than just those next to the centre aisle.

The props & stage manager also had some challenges, as the front of the set was laid out with the ‘picnic’ and had to be moved before and after the interval. This made for an awkward pause before act 2 could begin, while the picnic was re-laid after the audience were seated.

However the significant upside of this change-around was that the audience were sharing Don’s rather limited living space, and this brought immediacy to the drama. The physical & emotional closeness created an atmosphere that was absorbing and compelling. And this is reason enough to out-weigh all of the minor irritations, because it created powerful drama, which is what the audience came to see – and on this showing will , I believe, come back for more of.

The costumes were on the whole well-selected and nicely suited to the roles, notably the silver blouse – very sixties! The tattoos on Don’s arm were hard to hide in the underwear scene, even with some layers of foundation, but I felt that a long-sleeved shirt would have covered them better for the start of the play while Don’s character is established with the audience. They are clearly incongruous for a blind boy from Scarsdale with an overbearing & controlling mum.

The cast were, without exception, brilliant. Some highlights were the slowly building tension that grew into the argument between Jill and Mrs Baker. Don’s breakdown when he realised that he wasn’t going to make it in New York alone, and Ralph slightly comically LOUDLY ENUNCIATING TO THE BLIND MAN!

Billy, as the outwardly confident young man making his way in the world, reveals a fragile core when his dream of independence is shattered and he admits defeat in conceding to return to mother’s apron strings. He sustained being convincingly blind (which must be *really* difficult!) throughout. Well done.

Shayla perfectly played Jill the flighty next door neighbour as a ‘Holly Golightly’ character. Her interaction with Don was by turns intrigued, infatuated, bored, and then thoughtless as the next infatuation takes hold. She is happy and carefree, too preoccupied and self-absorbed to see the effect that she has had on Don as she’s already moving on, literally, with Ralph. And presumably she will do the same to Ralph next week.

Both Shayla and Billy did very well to sustain intrigue throughout a first act which is confined to two characters and one set, as the situation is set out, with much of the plot reserved for act two.

Vicki was truly imposing as Mrs Baker the overbearing and protective mother from middle class Scarsdale. I’ve never been to Scarsdale, but I can feel that I know exactly what it’s like, thanks to her performance, and some of the comments from Ralph.

The rising tension in the brewing argument between Jill and Mrs Baker was a highlight of the evening. The end of this argument “If I’m going to tell anyone to go home it’s you Mrs Baker. Go Home!” was met with a spontaneous round of applause by the audience. Not because it was the end of the scene but because Jill’s swift exit broke the tension that had been growing and enveloping the audience.

Ralph’s appearance as the bawdy director, clumsily putting his foot in his mouth with every other word, was nicely played by Alex, with a swagger that befits a hipster theatre director following the latest trend (‘they changed it to homosexuals because it’s in right now’). His ‘slightly too loud’ voice was perfect for a character who thinks of himself as larger than life but is only a bit part in the context of Don’s life.

All the accents sounded to my untrained ear suitably “New York” American, and were consistent and sustained throughout – not always easy to do, but all of the cast made it look (sound) natural.

Don’s despair at the end and his anger vented on the vase (was it meant to break?) maintained the drama right to the close.

Please forgive any minor criticisms in the above, they are merely one opinion, and overall this is a play of which Marion and Shepperton Players should be very proud. Well done to all.