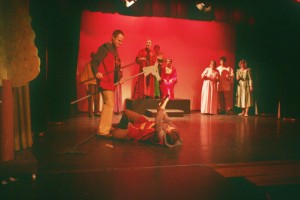 I doubt if Shepperton Players have ever given better value for money. Director Gill Lambourn opened with an inspired piece of casting in which Emma Dow became simultaneously MC and Cook. This role gave shape to the whole evening from the opening, through the constant verbal tussles with the churlish Miller (James Wallis) – who sat in the audience  larger then life and  twice as  uncouth – to the Finale.

Music was provided by the delightful five-piece Medieval Medlers who made modern instruments sound remarkably Fourteenth Century. The lighting in the hands of Richard Smith also made a subtle but significant contribution to the whole.

The Knight’s  Tale is the longest, and most difficult to stage with conviction. Both Howard Tame (as Palamon) and Alistair Ross (Arcite)  showed their dramatic range in the Pardoners Tale and the Franklin’s Tale. But while both gave creditable accounts in their initial roles as warring nobles in the Knight’s Tale, neither was at his convincing best in this tale of chivalry.

We were, however, instantly rewarded with one of the highlights of the evening, the Nun Priest’s Tale introduced by Doris Neville-Davies in black habit, every inch the Nun. From first cockcrow, Chris Stotesbury (briefly released from his ‘cello) made a magnificent preening cockerel Chanticlere, and Sally Warner a superb chicken Pertilote. Their every movement from jerking necks to scrabbling feet, were pure poultry. In this they were joined by equally able chicks, and the movement of the chicks about the farmyard was well choreographed. James Wallis reappeared transmuted into the lethal sweet-talking Fox. Sally Parker was the hapless Farmer’s Wife making some skilful dramatic stage tumbles (which would not, I am sure, account for this being her only appearance of the evening). Follow that!

What followed was the Tale related by The Pardoner, now updated to Social Worker. At the heart of the tale were Tom, Dick, and Harry –  roles in which the erstwhile Palamon and Arcite seemed very much more at home, being joined by young Nick Hampshire. Diana Denton-Baker as the Old Lady provided one of the excellent cameo performances of the evening (others including Marion Millinger as the Miller’s Wife and Olwen Holme as the Guru).

As the narrator in the Reeve’s Tale, Eric Champion, previously the Knight’s Jailor and later Carpenter John, revealed both his lean legs and his strong stage presence to good effect. Howard Tame as student John, looking much like Rupert the Bear on a ripping wheeze, was happily joined again by Nick Hampshire as fellow student Alan. Together they gave a good account both as seeming innocents abroad and later as scheming thieves after more than the Miller’s corn.  As the Miller’s wife  and  daughter, Marion Millinger and  Robyn Watts were suitably sexy but grounded, with  nice singing voices and Marion’s face at key points was brilliantly expressive. Here, and in other Tales, we enjoyed the imaginative upright beds occupied by less than upright folk.

After an interval, we returned with the Merchant’s Tale where Peter Smith excelled himself as a gormless, bumbling, desperately keep-fitting, old man, and was ably aided and abetted by  Roland Fahey (a competent future King) as his incompetent friend Justinus. Caroline Millinger convinced both as the innocuous virgin and the devious adulterer, with a slipperiness enough to worry any male. Sally Penman was a delightful Proserpine always  having the upper hand over her  amusingly grumpy king.

Old friends from many previous tales soon returned in fresh roles, joined now by Helen Warner as  Dorigen in the Franklyn’s Tale: Shepperton Players clearly has strength in depth Diana Denton-Baker made a fine worldly-wise Wife of Bath, with Robert Hardy, Knight from the opening Tale, retuning as another Knight. The magical transformation of the Hag (well acted by Cathy Dunn) into a young beauty (Caroline Millinger) was a well-managed coup de theatre.

The ‘mucky’ Miller’s Tale lived up to expectations, with an excruciatingly believable red-hot poker to punish the sins of the flesh. Sophie Hellicar obviously revelled in the role of the “outgoing” wife always on the lookout for a bit of fun and the multitalented Nick Hampshire demonstrated a fine singing voice.  This was an hilarious fitting near-ending to the evening’s entertainment saving for the Cook’s taking centre stage and the whole cast receiving well-deserved applause.

This was a decisive ending, and I would have wished more of the stories to have reached clearer minor endings; too often there was an awkward pause both for actors and audience while the latter became sure it was time to applaud.

Overall, this was another tremendous success for both Gill Lambourn and the whole cast. Chaucer would have been proud of them.