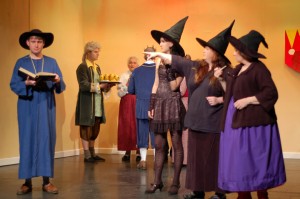 Terry Pratchett’s Discworld novels are among the funniest, cleverest, and best loved in modern literature. Now award winning writer Stephen Briggs has brought them to life for the stage. If you aren’t familiar with the novels don’t worry, just think Monty Python meets The Adams Family and get ready to laugh. In Carpe Jugulum the politically aware witches are called upon to defend the kingdom of Lancre from a family of new-age vampires. It begins on a joyous occasion when the progressive King Verence has invited various dignitaries to attend the christening of the royal baby. Unfortunately, Granny Weatherwax’s invitation has gone missing and when you invite vampires in they’re not inclined to leave quietly. Can the power of Lancre’s witches defeat vampires who aren’t afraid of losing their socks? Can the inner, thinner voice of Agnes Nitt make herself heard? Will Igor’s self-surgery leave you in stitches? Can the novice Omnian priest do anything useful at all? Find out as Terry Pratchett’s Discworld comes to Sunbury.

I came to this play expecting to be disappointed. Discworld is an acquired taste, one which I had failed to acquire. Then I read that the running time of the play was two-and-a-half hours, and doubted whether I, or many of the audience, could sustain attention.

I was so wrong. I left the theatre at 11pm delighted by the whole riveting experience.

The play opens to a skilful, solid, and convincing set designed by Ron Millinger which provides six main spaces which easily accommodate the fifteen locations specified in the text. I loved some of the witty touches, especially the familiar black-and-yellow cover of the ‘Dummies Guide to Witchcraft’.

Full marks also go to those responsible for the many props (the Doyle family), for special effects (Pat Langley), slick lighting changes (Jonathan Millinger and Richard Smith) and for sound (Stephen Millinger) for the many dead-on-cue deliveries.

Olwen Home directed at a flowing pace which ensured that we did get away by 11pm, but not too fast for us to miss some of the wit.

Not one of the 21 actors was less than competent, and most were good.

In this production it was some of the smaller parts which were among those performed most memorably: Roland Fahey as The Old Count, Hugh Thomson as Death, Keith Doyle as The Border Troll, and the delightful method-acting of Sally Warner as that ultimate mongrel, Scraps.

Turning to more substantial parts, special mention must be made of Caroline Millinger as Perdita the thin witch trapped inside Agnes Nitt, the large one played by Robyn Watts. Robyn was a star, but even she was at times outshone by her alter ego who followed her faithfully everywhere, sometimes leaning, languid, bored, examining her fingernails, at other times passionately angry as Agnes fell under a vampire spell.

Among the vampires I enjoyed the quiet menace of Ron Millinger’s Count and Sue Dye’s loving but truly chilling wife and mother, but was especially impressed by the “children“ – Vlad, played by Philip L Milne as  the spoilt-brat product of a very  minor English Public School, and the virulent blood-lusting Lacrimosa played by Belinda Doyle who reminded me of a very minor Royal.

Turning back to the Witches, Nanny Ogg, played by Lorna Doyle in the longest Witch part, was the best. Awkward, determined, defiant, down-to-earth, she exploited to the full the language given to her.  It wasn’t just the fact that we never knew what she would dig out next from her voluminous knickers that held our attention at all times.

Sally Penman – who gave a nice performance as the former Witch now Queen – had a difficult role.  Somehow she had to persuade us that she was now every bit a Queen (in which she succeeded), but also that she was until recently a full-bloodied Witch (which we found hard to believe)

Even more difficult was the Joy McQuade part as Granny Weatherwax, a pivotal role in the whole story-line.  She appeared very much the witch, and gave the part a sensitive reading.

One, Steve Lewis was a comic masterpiece as Igor, the stereotypical hunchback servant from all the old black-and-white Vampire B-movies, a vampire longing to go back to the old days of dungeons, coffins and cobwebs.

The other, Robert Hardy as the Quite Reverend Mightily Oats, who reminded one of Derek Nimmo, brought out all the satire on religion contained in this play, here relocated in a religion called Omnianism . We have the constant schisms, the dietary rules, and the problems of translating ancient languages.

The cast variously performed well the occasional filmic freeze-frames, and the Director managed well that terrifying stage-direction “a mob enters”.

The length of the play did not in the end put an undue strain on the audience, but it did so on some of the cast, and towards the end the busiest person was, sadly but efficiently, Gill Lambourn as Prompt, the need for whose services did at times interrupt the flow.

Ultimately, though, it is not much more than a knock-about menace-filled comedy, a good one, and one of which Shepperton Players gave a good account.