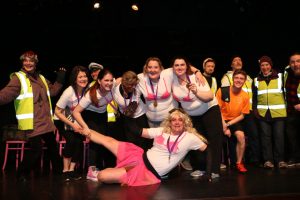 The Shepperton Players’ latest production, ‘Cheshire Cats’, ably directed by Marion Millinger, was brought to the stage by a confident array of performers with spot-on comic-timing, believable rhyming, and moving the audience to tears in moments of great poignancy – all for a great cause to raise money for Breast Cancer charities.

The play centres around a group of women getting ready to take part in the ‘London Moonwalk’, a half marathon at midnight where bra attire is essential and remembering to walk not run is vital!

Their team spirit is shaken when Vicki’s young toy-boy lover, Andrew, joins the group at the last minute. ‘He’s young enough to be my son!’ exclaims Vicki- however this Andrew would have been quite a good match, age-wise for her.  Accounting for the lack of available young men around (I empathise greatly) Guy Shirley played an excellent cheeky and flirty Andrew mercilessly targeting poor Yvonne who wanted a no-men-allowed holiday away. His surprising transformation into a Cheshire Cat was superb!

Gail Young’s play reminds us that so many people are touched by this awful disease. Each character has a story to tell. Scenes in which we find out more about the character’s back-story are said in rhyme and break the fourth wall. Otherwise known as ‘meta-theatre’ this could have been off-putting. However each actor spoke naturally and the rhyming added to the poignancy of the monologues. To focus these scenes by blacking out the background and using a spotlight to highlight the character would have made for a more dramatic intense moment for the audience. The use of the floor space expanded the park setting and helped to engage the audience especially at the end with Maggie’s bombshell. The use of marshals drumming up enthusiastic chanting was great and worked well alongside James Manning’s over-enthusiastic, energetic and impressive cart-wheeling Aerobics Instructor directing the audience to ‘warm up’ before the walk. Olwen Holme and Anne Wheeldon made a perfect double-act! Olwen’s deadpan look; unimpressed that she was dumped with holding the 9 mile sign was comically contrasted with Anne’s loud Madge- the walkie talkie moment was just perfect! Policeman, Robert Johnson provided more laughs and Peter Cornish amongst other cameos made a charming drunk getting the audience to sing the rest of the lines of ‘On the Street where you Live’ and especially giving ‘Yvonne’ a moment of magic that family life fails to provide.

Lighting was well-designed by Alastair Joel- the street lamp effect being especially successful- and in the safe hands of Rachel Millinger.

The set was minimal with pink chairs used and adapted as a park bench and train seats. These and the ribbons each performer wore made for a constant reminder of what the play was in aid of. Marion moved and grouped her characters to good effect with some lovely stage ‘pictures’ such as the finish line of the race where Keith Bailey made his appearance as photographer. The scene changes were swift and the action kept good pace. Caroline Button’s sound effects, were effective in setting the scenes although at times they were a little abrupt – an ongoing low hum might have been useful for the busy train station and waiting area before the walk.

The costumes were well thought through. Maggie’s carefully chosen luminescent tracksuit showed she was a newbie to the group and to the walk. The Cheshire cat costumes all looked as if they had been made at home on a girly evening as Vicki suggests. Andrew’s outfit complete with blonde wig was ridiculously and perfectly over the top!

The team is fronted by bossy-boots Hilary played confidently by Sophie Tame. Sophie’s sarcastic reactions to the ‘time wasting’ during training were well-timed and she achieved the necessary great contrast for her moving monologue about the loss of her mother. Occasionally some lines were lost after audience participation, just wait for the audience to settle down before continuing.

Abigail Murrell portrayed Hilary’s old friend, Siobhan. Abbey kept in character throughout as a stalwart support, not afraid to remind ambitious Hilary of the true nature of their team’s purpose. Having portrayed several comedy characters at Riverside this play gave Abigail an opportunity to create a more substantial role which she tackled conscientiously.

Carrie Millinger played the grounded and supportive Yvonne. Her life with a husband and three sons has taken away the magic from Yvonne’s life and Carrie conveyed her desperation for a weekend away with great assurance. Her indignation at Andrew’s arrival paired with her cringing in response to his teasing was marvellous.

Seasoned walker, Vicki was portrayed by Vicky Prince. Attractive, fashionable and sexy, Vicky commanded the stage. The applause after her monologue was well deserved. She portrayed Vicki’s self-assured game-playing with Andrew but captured her deeper feelings with sensitivity. On the train her reaction to Andrew’s card – a significant moment – was somewhat lost and maybe a change in lighting would have helped here.

Special mention goes to Juliana Anderiesz who was superb as an over-anxious new comer to the group. She had excellent comic timing in the training sessions and was believable throughout. Her barely expressed hints that all was not well with her were subtle but chilling. Juliana’s poignant final monologue went straight to the audience’s hearts.

It was clear that with Marion’s accomplished direction her actors had developed their individual identities and although aware of each other’s weaknesses were believable as a supportive group of friends who were a life-line for each other.