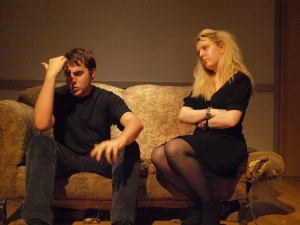 Review by Will Motley

Decadence is Steven Berkoff’s great cry of rage at the extravagance and privilege of the upper classes. And like many a class warrior before him he is simultaneously disgusted and fascinated by their bravura excess and contempt for all but themselves. He claims it to be a “study of the ruling classes or upper classes” who “achieve pleasure very often in direct relation to pain they cause in achieving it.” It echoes such plays as The Ruling Class by Peter Barnes and the pre-Brideshead novels of Evelyn Waugh, though Berkoff’s play lacks the subtlety of both and the insider acid of the latter.

In a sharp and intelligent production at the Riverside Arts Theatre in Lower Sunbury, the recent revival of this play by the Shepperton Players was well received by slightly shell-shocked audiences last week.

Ostensibly the play revolves around a collapsed marriage between upper class Steve and his nouveau riche wife Sybil but the divide in the playing is always either between Steve and his mistress Helen – and Sybil and Les, the rough Private Investigator she has hired to spy on her adulterous husband.

In a stark and simple setting, the two couples played from opposing sofas in a manichean struggle, the posh lot in elegant white on a smart sofa and the discarded wife and her private dick in black on a settee that moulted its stuffing onto Sybil’s black dress. This marked an initial departure from the original concept in which the two couples are played by the same two actors, originally Berkoff and Linda Marlowe in 1981 (and later in the film version of 1994 he played opposite Joan Collins). Actually it made for a clearer exposition and was a successful move by director Alex Johnson allowing, in one instance, Sybil to almost assault the still figure of her husband. However it threatened to undermine the schizophrenic nature of the play and Berkoff’s fundamental point about the complicity of the working class in the whole rotten charade.

The play is difficult for actors as it has little interactive dialogue, almost no plot and consists mainly of long verse soliloquys stuffed with rich and scabrous language, puns and wonderfully crude sexual imagery. It is a credit to the four actors that they kept the pace and sense while wrestling with the layered meanings and sometimes dense imagery that is influenced by Shakespeare, Stoppard and even occasionally Beckett. They mined it for its scabrous humour with excellent timing and caught the music of the fleeting moments of lyricism.

Natalie Harries played Helen with poise and cold venom in equal measure. In a standout performance of great intelligence she left the floor littered with the corpses of strangled vowels and manipulated her man with contempt – playing the wanton harlot to excite him and finding her deepest ecstasy in the bloodlust of the foxhunt. She is the only character who seems to understand the trap she is in and Harries cleverly let momentary glimpses of vulnerability show through before quickly squashing them and tragically carrying on circling her man, fully centred upon him, struggling vainly to be noticed in the swamp of his self-obsession. Her deadpan humour was delicious – after a long speech by Steve about drinking she shoots him between the eyes with the line “If that’s a good time I’d rather be dead.”

Steve, played with a cauterised emotion verging on autism by Peter Cornish, is the obvious villain of the piece. He gave a chilling account of his childhood of parental neglect and abuses at public school (“poofs palace for the sons of fools”) that have converted his self-pity into a mountainous self-absorption. Cornish elicited no sympathy from us and charged on, utterly repellent in his sly racism, lyrical about drinking and relishing the long restaurant speech, with food about as sexual as it can be. Here Berkoff is nodding to the originators of  the  ‘philosophy’ of decadence in the late nineteenth century – among them Wilde, Beardsley, Huysmans and Mallarme and best encapsulated in Ernest Dowson’s famous remark that “Absinthe makes the tart grow fonder” – here turned into a line for Steve: “I like to Fred Astaire and Gene Kelly / I like to lick absinthe off your belly.” Even if his accent occasionally landed on a few flat a’s (Berkoff did too) Cornish fully epitomised the suppressed and slightly dirty excitement of the schoolboy onanist that is the lingering stench of a boarding school education.

Sybil, played by Jennifer Hazell, has the most uneven lines and Berkoff’s weakest writing in the piece – the East-end patter jarring unconvincingly with the doggerel rhythms of the verse. It was an affecting and touching performance, brief moments of sympathy undercut by her manipulation of Les, offering sex as a bribe for murder, which she contrasted well with her anger at her husband – with a dawning realisation that she was also angry at her own stupidity and blindness: “ours is not to reason but to die / that’s how I felt.”

The fourth character Les is the smallest but most interesting – Berkoff felt at home with this one, having grown up in Stepney, and played it with priapic filthiness. Alex Johnson, the director, stepped into the role after an actor dropped out at short notice. He grabbed the part with an almost venereal relish but did not quite inhabit it. He projected the fragile male ego in need of female reassurance (parallel to Steve and Helen) with a director’s understanding and negotiated the rollercoaster, veering between crude fury and poetic cliché, with intelligence; his last big speech, closest to Berkoff’s own howl of rage, was delivered with convincing impact.

The production as a whole was stylish and coherent and much credit goes to the cast and director for this. It was lively and clear throughout and deft touches kept the audience alert. It is a challenging play to stage as so little actually happens and so much of the work is with the voice and the language – which came across clearly and with an understanding of the multiple references.  The lighting, mainly harsh white light, and costume were all clean and unobtrusive. The music before the start was, fittingly, Eton Rifles by The Jam. Such attention to detail showed a thorough and creative direction with the actors responding intelligently. There were no weak spots and the pace was compelling throughout.

The heavy sexual language has lost some of its impact from the original time it was written, when Mary Whitehouse and the ‘Tory mothers’ were frothing at the National Theatre for Romans in Britain (which gets slyly referenced in the play) so the question remains as to the relevance of this ‘yawp’ at Thatcherism for today.

The early eighties was a divided and fractious period and the left was shattered and angry. Thatcherism was not exactly of the upper classes – but they went along with it all the same, somewhat in hiding after Wilson had successfully mocked the “grouse-moor complacency” of Alec Douglas Home. Of Thatcher Macmillan commented acidly that there were “more Estonians than Etonians” in her cabinet. In fact the eighties saw the rise of the bankers and corporate raiders, Murdoch and red-top support for Toryism. This complicity of the working class, their bending before a capitalism that appeared to favour them – but actually oppressed them – was what Berkoff really tried to skewer in this play.

Today we have a new (-ish) predominantly Conservative government, The Prime Minister and the Mayor of London were at Eton together and with the Chancellor of the Exchequer were all in the Bullingdon. Infestations of Old Etonians are everywhere (12 in the Government currently and no Estonians) and they are all over television and film (Hugh Laurie, Damian Lewis, Dominic West, Eddie Redmayne, Tom Hiddleston, et al). The uppity spivs in journalism, banking and the City are getting their come-uppance and Downton Abbey is ubiquitous. The upper-classes rule triumphant still. This play remains relevant now but, infuriatingly, its scream has been absorbed and castrated by them. If Old Etonian Prime Minister David Cameron can choose Eton Rifles as one of his Desert Island Discs and still be taken seriously then irony is dead.