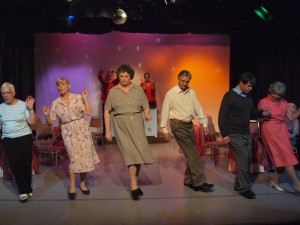 How, overall, might I rate his production? Competent? Yes, of course: Shepperton Players have a fine reputation to maintain, which they certainly do on this occasion. Workmanlike? Certainly. But it was more than just competent and workmanlike. Inspired? Inspiring? Enlightening? Such words would be far too heavy for a play which is, at most levels at least, a piece of “escapist” fiction. This is not a play to set the world alight, though it is one which throws some light on one aspect of working class life in the North of England. As such it demands appropriate accents which all members of the cast managed sufficiently well.

Escape itself , and its opposite, being trapped, is of course, a central theme of this play, starting with the group of pensioners aiming to escape for a week at the seaside but in fact trapped in a routine re-run of previous years’ trips, in the old familiar jokes and clichés, and in their firmly fixed personalities.

Of the two principals, Phil is trapped in a stone-dead marriage, and Pat risks being trapped in a lonely love-lacking  widowhood. And this is where escape turns into the kind of escapism found in cheap fiction rather than – for most people – real life. Phil ‘s is of the unbelievable kind found in comic-book thrillers  (“one bound and he was free”), Pat’s the kind of wish fulfillment which fuels the Mills and Boon market.  It is to the huge credit of Robert Johnson and Gill Lambourne playing these key parts that I, for one, found myself suspending my disbelief when they came together. These scenes were moving indeed. More about these two performances later.

This play may not have been true to real life, but I rate this production overall as true to the script, and bringing the whole thing to life. What more could one ask of a production than this kind of truthfulness and liveliness? Perhaps only that it should achieve the three big E’s, for which I award it full marks:  it Engaged the audience, Entertained us, and provided an Enjoyable evening. These,  then, are the five words  on which I would rate this production, and do so highly.

Marion Millinger as Director wisely gave us a leisurely start which enabled each of the holidaymakers, by both mime and words, to establish something of his or her character, and then moved smoothly from one scene to another, this aspect being helped by Ron Millinger’s flexible set and (keep it in the family!) Stephen Millinger’s sound which ensured that the frequent music always arrive dead on cue, matching the excellent timing by the cast. The costumes by Chantal Suppanee and Pat Champion, and the props by Pauline Hutton, captured well the social class and the time (Niki Lauda, corned beef, and – with Phil’s words “it’s being so cheerful” – even an echo of ITMA’s Mona Lott). I loved especially Pat’s battered period suitcase.

In general, the cast did the play proud. Either I am going  deaf or Emma Dow as Prompt was unemployed.

Roland Fahey as the much-put-upon driver who had heard it all before was suitably lugubrious as he sat trapped (yes, him too) at the wheel of the charabanc (lovely period word that) muttering to himself about this about these “bloody geriatric delinquents” (and later, unrecognizably, as the jet shop man). As the driver, we felt for him, especially in the face of

Henry, played true to type by Ron Millinger as the interfering know-all back-seat driver. This is the same Henry/Ron who, in the talent contest, nearly brought the house down playing the spoon to a temperamental wind-up (and winding-down) gramophone.

Eric Champion as Jimmy was every bit the hail-fellow-well-met joker in this pack of pensioners, loud, crude, insensitive (a piece of anti-type casting!)  happily wed to newcomer Anne Weeldon’s Joan who gave as good as she got in their frequently sexual teasing exchanges. Welcome Anne, I hope to see you on this stage again.

Maureen, Doris Neville-Davies, who brought out this character’s prejudice against Asian shopkeepers, disgust at kissing honeymooners, and severe disproval of Pat’s behaviour; and

Jessie, Olwen Holme, who gave a brilliant rendering of a week woman who is wedded to her cats and who constantly echoes others’ words. This is a woman who has never really grown up, is innocent of French letters and of 69, and is covered in embarrassment when she lets the words “nice bum” escape her.

Like several other members of the cast, Olwen seized with both hands the moments when the (metaphorical) spotlight fell on her, most memorably the recitation the Director added to the talent contest with Jessie reciting Eleanor Farjeon’s poem Mrs Malone which she would have leant by heart at school and which she recited nervously exactly as she would have done as the child who was still within her.  And we all nearly cheered when at last the worm turned and she turned on Kathleen saying she could to stick her friendship “up your bum” adding that she had been waiting to say that for 25 years.

Clare  – Alex Alderson – and Debbie  – Laura Armitage – came over as young waitresses who the pensioners would no doubt call “flighty”. Together they provided a fine foil to the pensioners, as did Pat’s middle- aging daughter Sally – Sophie Tame – and son-in-law John – Robert Hardy– from whom I might have looked for a stronger reaction to revelations about his wife’s younger days.

As for the female half of the sad Sangri-Las, Cathy Dunn as Edna, the icy and venomous wife-in-name-only, is the first to show clearly the contrast between the public and private faces.

One moment she is able to pin an artificial smile – more grin – on her face, the next to  respond to Phil’s comment about one of the dances “The punters love it” with the cynical “Just shows how thick they are”, and going hammer and tongs at Phil at every chance. Unfortunately Edna was at the back of the stage for most of the time so we were unable to see clearly enough her expressions of disdain, contempt, and jealousy. It might have been better if her base could have been at the side of the stage.

The Director led us into the gulf between this couple by having them enter down the side aisle, one on the right, one on the left, as far away from each other as was possible. A nice stroke.

But now I must return the Principals.

Gill Lambourne exploited the mischievous side of Pat’s nature: the ordering of a double brandy, the refusal to buy widow’s black jet – I could go on and on. And she showed clearly how, Phil having made the first move, Pat made much, if not most, of the running. Then we have her to her final half-shouted words to her daughter –“Stay out of my life”. Her scenes with Phil were, as I wrote earlier, moving and well-nigh believable. I have only one criticism. That is that, while her later assertiveness and joy were acted with full conviction, those moments, admittedly few in number and of short duration, when she  sadly remembered what she had lost, were not acted with the same conviction, notable when she says “I’ve had a bit of a weep”. Words yeas, but I detected little evidence of a post-weeping state.

Phil brought out the best in Pat, while Pat brought out the best in Phil. And in a similar Gill Lambourne’s acting brought out the best in Robert Johnson as an actor. This was more than the Shangri-La and wretchedly married Phil/Robert.  Somehow he seemed at times not fully at ease on the stage – until he and Pat got together when they gelled as characters and matured as actors, and brought out clearly not only the sadness of loneliness but also the overarching power of love. I left the theatre hoping for, and almost confident about, a good future together for Pat and Phil.