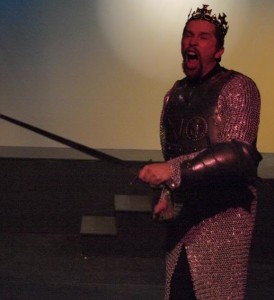 Shakespeare is undoubtedly the most famous playwright of all time, his plays performed year in and year out, all across the globe. Yet, to even consider undertaking the task of putting on and performing a Shakespearian play is a herculean job and to do it well is even more of a challenge. I am glad to say, however, that Shepperton Players, ably and enthusiastically led by director, Gill Lambourn, more than rose to that challenge.

The King, the infamous Richard III himself, is a hot topic of conversation in the media at the moment, despite being dead for 500 years which, to an audience, accentuates the fact that Richard III and the characters around him were real people, making the play seem all the more genuine.

Shakespeare was written to be watched and enjoyed by both contemporary and modern audiences, the cast of Richard III gave a consistent performance, with some outstanding ones. The play is presented in such a way that the audience were kept abreast of what was going on and interested in the plot. Instead of getting lost and bogged down in the words and language that is unfamiliar to a modern audience’s ears as some performances of Shakespeare allow us to do, it was clean, clear and flowed well. Shakespeare can be done badly and it can be done well. Shepperton Players’ performance was interesting, enjoyable and most of all understandable.

The set, created and managed by Andrew Hellicar, was simple, scant and unchanged throughout the entirety of the play. Actors filled the space themselves rather than using elaborate and unyielding scenery to do so. The set, although simple, comprising in part of a small set of steps and platform, proved an effective springboard for the cast to present the life and times of these historical figures. Different parts of the stage were used as different places, the staging area in front of the half tabs, was transformed into the Tower of London with just an additional bench. The whole stage was used to great effect and permitted the scenery to remain stationary throughout and the gauze and curtain used to separate two often very different scenes. The set reflected the traditional take on and direction of Shakespeare’s Richard III.

The performance was also lit in an understated way once again reinforcing the traditional adaption of this particular play and the lighting was used well to signify changes in the time of day and to illuminate characters, for example when Alex Johnson in his role as Henry Tudor, became the focus of the play. Designed well by Alistair Joel and operated by Rachel Millinger, it was done in such a way that matched the action on stage.

In my opinion, the sound effects helped make the play a success, although not so overt as to spoil the action, it did help to guide the audience, through some of the more confusing elements, i.e heralding the arrival of the King through a fanfare, through the noises of battle or the relentless drum beat that signified death, when there was not much action on the stage itself. The technique of pre-recording the voices of those that Richard killed to reflect the confrontation of his sins on the eve of battle was eerie and ghostly, and for me, was a particular highlight.

Another highlight, as an audience member, was the costumes of the entire cast created by Pat Champion and her team of assistants. The costumes looked authentic and completely fitted in with the overall direction of the play. The male actors wore different yet very similar garments, with Richard standing out in all black as the one to watch. Although, multiple characters were played by the same actor, they were noticeably different, in part, due to the subtle changes of costume. The female characters in the play all had costumes that were both realistic and relevant to the play’s vision. With so many characters wearing period dress such as this, the costumes must have been difficult to source and produce and the wardrobe team did a commendable job.

Although, I have already commented on the simplicity of the set, the props that were used looked very genuine. From the swords to the realistic sound of Hastings’ head when the blood stained bag thudded on the floor, nothing was overlooked. I enjoyed the use of chainmail on the characters going into battle at the end of the play it added a touch of realism to the production and looked very effective. The construction of Henry Tudor’s tent in the scene where Richard and Henry share a stage was very smooth and was a creative and different way to represent his surroundings without making too much of a difference to the stage. It also could be dismantled and taken away very quickly by the actors that were holding it.

As a whole the acting in Richard III was very competent but while there were some very strong performances, there were some more uneven ones as well. The four female parts, all of whilst not huge are still pivotal to the plot, were all praiseworthy. Ellie Cahill who played Lady Anne, was very well suited to her role, passionate in her acting and emotive in her speech, particularly in the first scene when she is grieving for her dead husband. In contrast, Emma Dow played the character of Queen Elizabeth in a more subtle way, her portrayal was of one whose grief was more controlled but no less emotional, her performance was one of the most enjoyable and thought proving of the entire production. Marion Millinger’s take on Queen Margaret was an interesting depiction of an historical figure, she captured the spirit of the strong Queen well. Anne Wheeldon as The Duchess of York also gave a strong performance and projected her lines with venom tempered by sadness and grief.

Alastair Ross portrayed the Duke of Buckingham who lost his head when he switched allegiance from Richard. He played his part proficiently and really understood some of the humour behind his lines, providing occasional light relief, but putting in a poignant performance when he was led to his death. Another performance to mention is that of Jason Lucas in his role of George, Duke of Clarence, his intonation of his lines was clear and concise, as well as being evenly paced. He really understood the rhythm and nuances of his characters lines as both Clarence and later the repentant murderer Tyrell a part I particularly liked he really brought something extra to role. Keith Doyle’s turn as both Brackenbury and the scrivener were well thought out and different from each other. The role of the young Henry Tudor was executed with flair by Alex Johnson, the way he was played contrasted wonderfully with the evil Richard.  The younger members of the cast, Alfie Batten and Benny Knight who played Prince Edward and The Duke of York respectively, were just right for their parts and proved to be the equal of some of their adult counterparts in the play. Although their roles were not large, they put their all into it and delivered their lines with confidence.

But the most captivating performance of all was that of Howard Tame’s interpretation of Richard III himself. The malevolent spectre of Richard slithered from scene to scene, making his presence felt by the rest of the cast. Howard played Richard as a man without redemption until he meets the ghosts of his past sins in his last moments. He met the enormous physical and dramatic task of taking one of the most famous of all Shakespeare characters head on. From the winter of his discontent to offering his kingdom for a horse, he was evil, cunning and sometimes downright frightening; Howard gave a compelling and confident performance throughout, even down to the traditional withered arm.

Under Gill Lambourn’s direction, Shepperton Players have brought Richard III to life. It flowed well and had great pace, a clear and comprehensible performance all round and one that was enjoyed and appreciated by myself, but the entire audience.