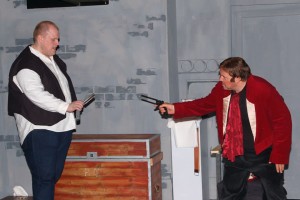 In Sweeney Todd we enter a dark Dickensian world of corruption and human degradation, a society to which one could rightly apply the ancient Latin tag Canis Canem Edit / Dog Eat Dog, although here we move up the food chain to Man Eat Man – simply turning the metaphorical into the literal.

Once again Shepperton Players bravely chose a difficult play, and once again showed the number of skilful actors they can draw on.

Sally Penman made an irredeemably evil but utterly believable Mrs Lovett, a cockney after your own heart – if only she could pop it into one of her meat pies. With an impassive face she still managed to impart a deep chill to the words “You’re so lovely I could eat you up”. She was more the villain – the ‘Demon’ even – than Sweeney Todd, which is exactly what is required.

Olwen Holme as the Beggar Woman – eventually revealed as Lucy – wheedled away convincingly as she sought “alms for a poor unfortunate woman”, backing away fearfully every time her appeals were rejected. A delightful feature was the endless hand tremor induced no doubt by her years of incarceration in the Bedlam-like Asylum.

Robert Hardy successfully doubled-up – or rather trebled up – in sharply contrasting roles, none more impressive than that of Jonas Fogg as the keeper of the Asylum once used to house Lucy and now housing daughter Johanna. His own insanity was revealed bit by bit at breakneck speed. His well-delivered justification that the only true madness is to lock up people in Asylums gave a dimension of social satire to an already complex play.

Belinda Doyle’s Johanna was a pure delight, every inch the wronged maiden, full of grace, and with the singing voice of an Angel. Her rejection of her Ward’s lascivious advances was pure melodrama both in the script she was given and the way she spoke the words “The grave shall rather have my maidenhead then marry you.” Belinda’s range was hugely evident when she froze in horror, her shoulders hunched up in tension, as she looked upon the bodies of the couple we knew to be her parents.

Philip L Milne made Anthony, who is already marked as a hero by having saved the Barber’s life at sea, went on to make just the fresh-faced clean-living worldly-experienced suitor for such an innocent maiden. They made a fine pair indeed.

Peter Smith made a suitably cynical, self-seeking and villainous Judge, Joanna’s Ward and wouldbe seducer. The self-knowledge which led to his self-flagellation was one of many pointers that this play is very much more than Victorian Melodrama: we could not envisage Squire Corder of the archetypal Victorian melodrama Maria Marten or Murder on the Old Red Barn engaging in such an activity. Having made the point so forcefully, it is a pity that Peter took quite so long to dress himself again when this might have been done off-stage.

The Judge’s side-kick the bumptious Beadle was presented by Geoff Buckingham with just the right degrees of unsavoury body and manner: he made me half-believe that if I was nearer to the stage than Row F he would smell even worse than the human remains in Mrs Lovett’s basement, a stench which he was sent to investigate.

In Alfredo Pirelli (Clive Tibbits) we were back with pure melodrama: here, if anywhere, was the classic moustache-twirling black-hearted male villain, a figure of unmitigated evil, here attempting blackmail. I was not at all sorry to have him filling meat pies.

Sally Warner as his assistant Tobias, later assistant to Mrs Lovett, has a tricky role, described elsewhere as somewhat slow-witted but required by the part to act as a suitable applicant for any‘Smart Lad Wanted’ advert, moving around with alacrity. In an interesting and good piece of casting, Sally does the latter well, and I suppose we can’t expect to see whether Tobias’s mind is moving at a similar pace.

The production was backed up by a clever set, including a convincing cabin trunk placed handily for bodies (one which closed with a loud bang to provide original pieces of punctuation), and an ingenious barber’s chair which could carry bodies off at an impressive speed. I must also mention the music by Steve Lewis which established the atmosphere and, at the opening of Act II, tightened the tension by one more notch.

At the start of this review I suggested that Sweeney Todd is a difficult play – a deceptively difficult perhaps. It is ultimately in the hands of the Director and of the actor playing Sweeney Todd (both in this case James Wallis) that any production stands or falls. This production did neither. It came close, but stumbled. There are two big challenges to be met and surmounted to totally succeed.

The first is to bring out fully that this play has greater depth than a Victorian Melodrama. This was certainly recognised in this production, though not brought out to a sufficient degree. The play is, in many ways, like a late Elizabethan/early Jacobean Revenge Tragedy, with roots less in Maria Martin than in Thomas Kyd’s Spanish Tragedy. It contains some of the sine qua non of that old genre, including several hints of a ghost starting with the Beggar Woman’s shocked half recognition of Sweeney “Your face!” and Mrs Lovett’s opening reaction “Are you a ghost?” And am I right in detecting in the shaving and tooth-pulling contest the relics of the usual play-within-a play? Most importantly, Sweeney Todd, despite his unforgivable actions, has a clear and understandable motive: he has been massively wronged, “I will be revenged” he declares, and “I will have blood”, echoing Kyd’s Hieronimo’s “Naught but blood will satisfy my woes” (III.7). While Mrs Lovett would, no doubt, happily continue using an endless supplies of human meat, Sweeney is not – despite the play’s subtitle – a pure ‘Demon’. He would be content simply to revenge himself by taking the life of the evil Judge who stole and – he believes – killed his lovely young wife. Seeing the Judge coming he says “One more and my work is done.” He will use Mrs Lovett to dispose of the evidence of his misdeeds, but holds her in contempt: there was to be no seaside retirement with that woman. As the brilliant Miller in The Canterbury Tales James Wallis would no doubt have made first-rate flour for the crusts of Mrs Lovett’s pies, but in the career move as the provider of meat to fill those pies he failed to reach the same heights. James filled the stage, albeit rather stiffly, and performed the words themselves well enough, but he did not, until the very late stages of the play, demonstrate the range of emotions – and above all of body language – required for us to feel sufficient empathy for the fellow, something which is surely required.

The second challenge arises from the number and frequency of scene-changes in this play. Many of these were too slow; some rather noisy and clumsy; one, early in Act II, maybe in a trick of the lighting, allowed us to see through the white screen, albeit in shadowy form, the frantic efforts of the stage hands: very distracting from the scene being played out in front of the screen. Too often the impetus of the play was lost. We needed crisper scene-changes. I don’t know how this might be achieved which is why I am merely a lower-case critic, not a Capital Director! I do wonder about doubling up of the title character and the Director. Maybe each needed to observe the other’s work independently.

This production, then, for all its many merits, did not in the end quite attain the very high standard I have come to expect from the Shepperton Players.

One final good point: Gillian Lambourn as prompt was either redundant or extremely skilful in her whispering. In either case, Shepperton Players come out well.