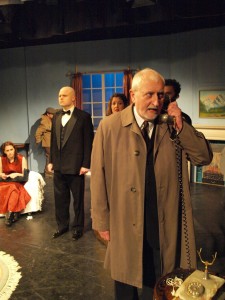 A credible production of this series of plays requires five things.

Firstly, it needs an Amateur Dramatic Society with strength in depth, chaos being at least as difficult to plan and execute efficiently as its opposite.  Shepperton Players has great strengths and experience to draw on , both among its regular members and new faces.

Secondly, it needs a strong Director to hold the thing together – or rather not to let it fall apart beyond that required. Emma Dow, as overall Director, ensures just this. (An earlier typo had ensures as endures, and maybe there is some truth in both)

Then it needs actors able to play it straight, whatever hilarity they may have shared in rehearsals. Between them they deliver all that is required, be it monumental gormlessness, bewildered incomprehension, muddled-up lines, missed cues, and all the other ills that theatrical flesh is heir to.

The fourth requirement is impeccable timing and, when required, equally impeccable mistiming. Props, lighting, sound, all delivered as required.

Finally, and of equal importance, a credible production requires an audience that likes such stuff. This, on the Saturday I was there, it seemed to have. though a restlessness among a few as the evening wore on suggested that schadenfreude has its limits.

Nevertheless, Shepperton Player came up with a production which was certainly credible, even creditable.

To analyze the production in the usual way, commenting on individual performances, would miss the point: it was the cumulative effect which counted, and everybody involved played their parts with equal competence/ incompetence.

A rollicking evening was had by all (or at least most) including – with some reluctance – your critic.

There was, of course, less than a two-year gap between the Farndale Macbeth and this. Perhaps we may have a rather longer gap before a third evening of this ilk.