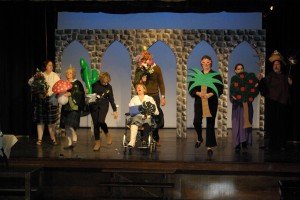 In Shakespeare’s tragedy, Macbeth refers to “vaulting ambition which o’erleaps itself”, and Banquo to “our naked frailties … that suffer in exposure”.

The Farndale Society suffers from both ludicrously “vaulting ambition” which makes them imagine they could tackle the Scottish tragedy, and from the “naked frailties thatsuffer in exposure” there on their stage. These are, of course, about the only two things the two plays have in common. But how about the Shepperton Players: in tackling this comedy are they in turn being over-ambitious, and are frailties exposed?

This seemed unlikely given their previous successes in staging challenging plays including Euripides, Orton, Chaucer, Bond, and Pinter. But the present play was a big ask, one of a very different kind.

The first issue, for me at least, is that here we have little more than a joke which might have been used as a story-line for a one-act play, but is hard to sustain for a full-length play. Reading the play on the page I was swiftly bored. Could the stage production avoid the same fate?

Then there was the question whether all involved could overcome my sneaky thought that this choice of play was bit of an in-joke: a play chosen by one Society, which knows what can potentially go wrong on stage, revelling in another Society’s actual sufferings – a not unfamiliar example of Schadenfreude?

And could the whole cast keep straight faces throughout?

At least I should not have worried about straight faces. These are all disciplined actors, and they remained throughout firmly in their roles as members of the Farndale cast with that cast’s varying reactions to the constant disasters: bewilderment, resignation, squabbling, and finally acceptance that Farndale productions were always thus.

The cast, many playing several roles, was never less than competent (perhaps that word is less than generous, so I’ll upgrade it the “competent plus”). This included Doris Neville-Davies as a diminutive Macbeth dominated physically (as well as emotionally as portrayed by The Bard) by his (her?) wife. There were, in addition, a few truly memorable performances.

Mark Woollard set the ball rolling as Gwynneth, with a histrionic near-manic playing of – or, rather, at– the piano, less a pianist than a Joanna-thumper. His abandoned casting aside of sheet after sheet of music was a brilliant variation of – or addition to – the script, one of several which Olwen Holme as Director instigated or encouraged throughout the evening. Mark’s quick-change into Adjudicator George Pineapple made me initially doubt if this was indeed the same actor. His outrageously camp performance had me in stitches. His final appearance as a drag queen was simply dazzling.

Lorna Doyle as the Farndale actress Minnie who had almost lost her voice but still had to soldier on as Banquo whispering her way through and miming, brought the exact degree of over-acting required – and more – including acrobatics with which I feared she could easily do herself harm or injure anyone sharing the stage with her.

Most memorable of all, for me, was Farndale’s Lady Macbeth played by Steve Lewis (late of Igor and Dr Rance), reluctantly press-ganged from the Farndale stage crew. With a squeaky voice and stiff unwomanly body language, he clearly hated the whole thing, towering unwillingly over Macbeth when he/she attempted a kiss.

The Witches were great. They could cackle for England (correction, Scotland), their distinctive noses giving them away when their wearers changed for other parts.

Marion Millinger (later Lady MacDuff) set the scene as Chairwoman MrsReece, succeeding admirably in her failure to hold things together, helped in her opening scene by the lighting folk’s requisite incompetence. This provided a hilarious start to the action.

This leads to the big question: could Shepperton Players hold the interest and initial pleasure of the audience? Such a play – more farce than anything – requires quick-fire action, but the situation, and script, call for constant interruptions. As the play went on I attended more and more to audience reactions as well as my own. Reactions became more muted, the joke palled, laughter became fainter and rarer.

I look forwards to exchanging Banquo’s Ghost for Ibsen’s (the next production by Shepperton Players, not the Farndale lot).

The name McGillivray (that of the co-author) is rooted in the Gaelic words Mac Gillebrheith meaning “Son of the Servant of Judgement”. I can only hope to have been a more faithful servant of judgment than sweet George Passionfruit.