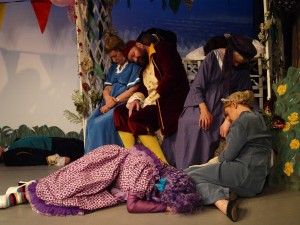 The children in the audience clearly enjoyed this Pantomime, judged by their boos of the villain, their engagement in the repartee, their ready participation in the game of Grandmother’s Footsteps up on stage, but above all by their faces and voices at the interval and again at the end of the show. Kids are, of course, the most important members of the audience at Panto, not just because for some it may be the first steps in a lifetime of enjoyment of theatre.

Typical of Shepperton Players who never settle for the easy option, this panto makes heavy demands on the Director and set designers – demands such as a dream scene and an impassable wood which could only be met on a modest stage by great ingenuity. Emma Dow, as Director, brought just such ingenuity to the task: a minor triumph of staging, with lots of delightful touches such as the footsteps on flight after flight of off-stage stairs of the tower which we heard before the Princess arrived at stage level.

In the cross-dressing comic Dame role Mark Woollard was a commanding presence, holding scene after scene together in a fine performance as both Dame and Nanny. This character’s baby-speak was a joyful satire on this common way of addressing babies, and the frequently out-of-tune singing simply reinforced the comic dimension. The baby’s OTT mobile cot was a witty prop.

This Panto does not play to the Shepperton Players strengths, which do not lie in singing.Luke Spencer as Musical Director played the keyboard with skill and oomph, ensured the five-person Chorus put up a good show, but could not overcome the weaknesses of most of the individual actors. Helpful Persons 1 and 2 – Ron Millinger and Karina Haywood – were wise – in fact helpful – when they intoned their songs in the style of Rex Harrison. They went on to straddle the set and audience with seeming ease, shrugged off frequent sackings, and did much to help things along. I especially enjoyed their spoof trumpets.

Keith Doyle played King Robert with the right combination of mighty frame and weak will, entering – with credit to the Costume Department – in pyjamas and a nightcap on top of which was a precariously perched crown, an instant pointer to his comic character. In fact all the costumes were excellent throughout.

It was clearly this King’s namesake King Robert the Bruce who led the author to introduce the menacing spider descending scarily upon the heads of the Court, and even managing – in an unscripted encore which especially delighted the children – to join in the dancing, just one element of the choreography by Gill Lambourn which helped many scenes of this production. This spider was the second non-speaking part which nearly stole a scene, the first being the opener dominated by the raucous crying of the new-born baby, the first sign that this new Princess was not going to be all sweetness and light.

No wonder mother Queen Cynthia could not cope, played convincingly here by Olwen Holme as a pathetic and lachrymose little thing, with more traces of the beggar woman she played in Sweeney Todd than of the beautiful young Lucy that beggar woman had once been.

Peter Smith as the Archbishop worried me. He seemed stiff and ill-at-ease on this stage. Was this a weak stage presence? Or was it a good reading of the stiffness often associated with senior Clerics, and how any Archbishop would feel ill-at-ease-thrust into such a crazy Court? Remembering Peter’s very different and confident performance as the wicked Judge in Sweeney Todd, I think it must be the latter.

The three good Fairy Godmothers could easily have been written and performed as much of a muchness. But just as the members of the Greek Chorus in The Trojan Women (also directed by Emma Dow) were given distinctive characters, so it is with the fairies, with acting constantly and strongly re-enforcing the distinctive identities pointed to in the script:Sophie Tame as Glynis, the comic one; Sally Penman as Blanche, the relatively normal one; andCaroline Millinger as the raw ‘apprentice’ one on whom in the end everything depends. Together they made a delightful trio.

Then Enter –with a dramatic flash and boom – the wicked one, Maultash, played with full venom by Stacey Gramlich, who deserved every boo she got (though not for her acting!). I cannot imagine a better performance in this role. Her every entrance was dramatic, most from the left as is the Panto tradition for all evil characters: sinister in both senses of the word.

And so to Princess Rose, the character the whole Panto is supposedly about. Sarah Oliver brought to this role just the right mix of headstrong petulance required, a girl much of whose attraction rested on her voice, one of a lascivious innocence reminiscent of the young Barbara Windsor. I feared for any man or Prince doomed to marry this spoilt darling.

In the second gender-swap required in Panto, Kirstyn Luton was amiable as the humble stable boy and modest when turned Prince, no more the standard heroic Prince than Rose was the standard perfect Princess. I worried about their future together!

The King’s final Proclamation that everyone was ‘going to live happily ever after’ would probably turn out to be as ineffectual as his constant sackings of the Helpful Persons, and I started to expect a sequel in which Maultash triumphs as Prince and Princess, and Archbishop and Nurse, are divorced. But then I remembered that this is all a fairy tale, and things like this do not happen except – of course – in real life.

What, then, did this production add up to, at least to an adult, or rather just this adult? I have enjoyed a lifetime of Pantomimes and am glad I came, though I did not leave the theatre with quite the delight of those key members of the audience, the kids. I knew that I had experienced a rather more than competent production, one better than most amateur dramatic societies would have attempted or managed, but this was not of the very best standard that I (a mere adult in the Panto world) have come to expect from the Shepperton Players.