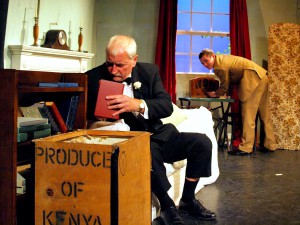 I can’t believe how quickly productions come around – it seems no time at all since I was at Riverside last, but there I was last Thursday to see The White Carnation, a pretty much unknown R.C Sherriff play. In fact I suspect this was probably the amateur premier since it only became available last November. I had read the script some time before that (long story not worth telling here) and thought S.P could do it well, so sent to Emma to see what she thought. Next thing I knew it was happening and a really job you did of it too.

On watching it on stage I have to say the author creates a big challenge indeed a real problem by having such a short opening scene. Hardly had the curtains opened on Carole Dow’s wonderful house frontage which looked terrific and exactly evocative of the era (I think Clive also had a small hand in creating and painting this although not in prog.) and the audience become interested in the characters and occasion than the wind blew and we were faced with a complete and complicated set change. I wracked my brains afterwards for other ways of doing this, considering, as I’m sure Emma did the gauze, the tabs, double sided flats and came to the conclusion that there was no quicker or more effective alternative. I feel Sherriff had not properly considered the balance of action when writing this. I also think that it might have benefitted the whole if we had been given a little more insight into John Greenwood’s behaviour towards his wife, the differences in their social standing etc. It would have allowed us longer to enjoy what was really was a delightful set and some nicely drawn characters from Katharine Lewis, Alex Johnson, Emma Heaton and Sally Penman who had little or no time to show us what her marriage had done to her personality . But the play is as it is and you did all you could to create real characters, minimise disruption and hold the attention in the audience.

Moving on we soon understood that poor old Steve Lewis was in a very strange situation and I must say the snappy dialogue made it as plausible today as it was when written. Alex Blackie was a lovely perky young PC although I did think it might have been worth cutting the reference to him already having four children. I know they married younger then but it stretched my imagination! But a minor quibble. He had plenty of energy throughout so good job Alex.

We then met a selection of characters all cameos to a larger or lesser extent and all well portrayed. Robert Johnson in his role of the older policeman totally thrown to discover that a man he had known and indeed whose dead body and/or funeral (forgive my memory) he had witnessed was there in the flesh so to speak before his very eyes. Alastair Ross demonstrated his excellent comic timing as the coroner. He always appears relaxed and natural on stage and gives the impression that his lines are coming fresh to his mind – quite possibly they often are!! – but we never think he is searching for them so is all good. Richard Fordyce was a delightful doctor non-plussed by the lack of blood, heartbeat and circulation but determined to do his duty. His accent is lovely to the ear and worked well in the role.

And then we met young reporter Lydia very well played by relative newcomer Shayla Ash. I think this is the third role I have seen her play and she maintains a high level of performance. In fact on the night attended Steve was most relaxed in his scenes with her, which I assume came from them both having been solid on their lines well in advance of the opening night. The air of safety does come over to the audience when the actors feel good about the scene and it means we also feel good. It isn’t to do with prompts or slow cue bites just something indefinable but genuine – Lives are busy, lines are a chore, but can and should be learnt asap in rehearsal especially when one person is carrying a huge burden and needs to know that no one will throw extra pressure on him. I have just been fortunate to direct a production with a cast of twelve all of whom worked full time but somehow were off their books a good three weeks before we opened. It was a delight and made for wonderful performances full of those little extras which I know Emma and other directors will agree only come when the lines as totally solid.  In reality there were very few prompts, long pauses or confusions but I know it will have got slicker and better as the week went by – wouldn’t it be great to be that confident from day one? Enough said I’m not here to preach.

Later we met three more characters the vicar, a piece of cake for Eric Champion to make him believable and loveable, well done. Then the neighbour, Mrs Carter in the shape of Marion Millinger. This was a lovely little scene I’m sure she and Steve enjoyed I would have liked to see more of her. This brings me to my second slight criticism of the script.  Good as the situation, dialogue and characters were I realised as I watched that it needed more of a subplot. With only one, albeit a very interesting one, it was difficult to develop enough diversity to hold our interest and must have been an extra challenge to Steve that conversations followed quite similar lines throughout. Perhaps Marion’s character offered the opportunity either to take us into more comedy with his pretended character and background, or the more serious revelations regarding his relationship with his wife and family perhaps giving more poignancy to his redemption at the play’s climax.  Or perhaps Grrenwood’s odd involvement with the sergeant and his boxing club….who knows. Still I am not a playwright and it’s not the point of this review.

Our final encounter was with Sir Horace Duncan portrayed Ron Millinger who gave us a nice blustering bureaucrat basically out of his depth both professionally and intellectually.

There was much to praise in this production. Emma’s staging and direction was as smooth and impressive as I expected. I know this production was a real challenge for her in more ways than one. I sometimes feel guilty for making too many things happen without others realising, which has perhaps led to the feeling that shows sort of happen painlessly. Hey don’t. Directors, regardless of their experience or knowledge, need assistance, particularly in the manual labouring division.

The sound and lighting were both executed efficiently by Stephen and Rachel Millinger with some lighting insight and advice from Ian Dow. One small thing, I did feel the front door always closed far more quickly than I believed anyone would get there after leaving the room – but only a fuss pot like me would notice. The stage crew were kept busy and the scene changes were all slick and trouble free and Pauline Hutton provided the cast with props that were correct and well fit for purpose which is exactly what is required.

I very much enjoyed the play, despite my comments here which are because I have thought about it a lot since which is what a good play should make you do. The acting was uniformly good led by Steve’s terrific central performance. I know exactly how it feels when have not one chance to glance at the script or refresh your memory but must be constantly on the ball and in the character. He was totally believable as the self made man who though pleasant on the surface had learnt little of what truly makes for a successful life, or death come to that. He related well to everyone and never for a moment lost his motivation.

As usual I have waffled on far too long. This was a good play with a fascinating premise, very well staged and performed even if, for reasons of the author’s rather than yourselves, it didn’t in my opinion quite rank in the top draw of Shepperton Players productions. But I was the person who recommended it and I honestly did enjoy it.