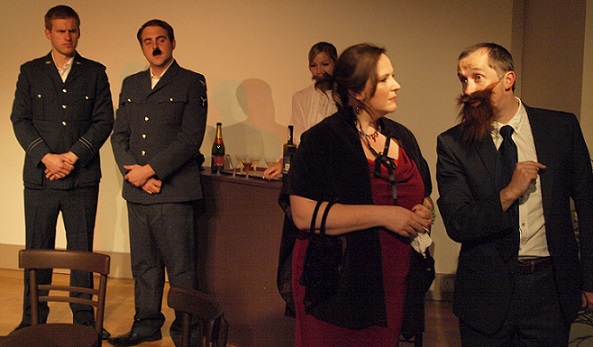 So to Riverside Art Centre for a bubbling evening of sophisticated wit from the pen of The Master. Shepperton players, under the direction of Diana Denton-Baker, gave us a selection of songs, short plays and sketches by the talented Mr Coward, from his most famous to his less well known. It was a hot evening and the traffic was terrible – so it was off to good start to find the theatre cool and air-conditioned!

The show opened with Red Peppers, a routine originally played by Coward and his long term accomplice Gertrude Lawrence. It was part of a 1935 group of playlets performed together as Tonight at 8.30 – others of which also appeared in that slightly premature production, now at 8. The singing by Fran Kitch and Adam Pollington was tuneful but a little hesitant – and the jokes were so classic they bore museum labels. (“Keeping it fragrant” seems to have been more naphthalene (moth balls) than freshly mown hay.)

This was followed by a performance of  hilarious (and chilling) vacuousness by Gill Lambourn in Early Mourning from the 1928 revue London Calling. In a succession of phone calls in skilfully modulated accents, Gill briefly and mistakenly mourns her husband, plumbing the shallows of her brief widowhood to great comic effect. This is Coward in a nutshell simultaneously skewering and adoring his victims.

Emma Dow gave us a moving 20th Century Blues which was followed by Ways and Means a short farce from Tonight at 8.30 – originally with Coward and Lawrence in the leads and memorably revived by Joan Collins and John Standing. Ellie Cahill and Alastair Ross took the main parts with confidence and an excellent grasp of the language and brittle morality. Absurd characters abounded and the neat solution to their genteel poverty was both predictable and satisfying.

The clipped accents and stylised speech were well handled – in almost 80 years they have evolved so much that authentic recreation can become an obstacle. Throughout the evening this was successfully avoided and the period was accurately established (though valet was pronounced ‘valitt’ in those days not ‘valey’).

The playlet and the first half ended with a company rendition of Don’t Put Your Daughter on the Stage Mrs Worthington – as fresh in sentiment as ever in this day of tuneless teenagers seeking their 15 minutes on the X Factor  et al – I wonder if Simon Cowell sings it in the bath.

The show resumed with a light sketch of excruciating social comedy in Cat’s Cradle about feline sexual frustration. Emma Dow channelling Frances Barber as a bohemian vamp contrasting with a prim Sally Penman (as an ‘Hilda Ogden’) concerned with having Tomcats ‘arranged’.

Clive Tibbits then emerged in a topi and gave us Mad Dogs and Englishmen – wisely avoiding impersonating Coward (and his speed) – keeping it clear and amusing.

After this was another classic, Someday I’ll Find You from Private Lives (1930) sung nicely by Ellie Cahill and Adam Pollington – Ellie’s clipped singing was a perfect period rendition with Adam, in tune throughout, accompanying strongly.

The sketch Travelling Light set in a railway carriage, with Sally Penman as an improbable thief eyeing up Alex Johnson’s traveller, was from a revue, On With the Dance (1925). The writing being  earlier was correspondingly weaker and gave little time to establish character, the acting was good the encounter altogether too brief.

However this was quickly followed by the hilarious Secret Service sketch, with successions of absurd accents and spies galore and the cast well disciplined in taking down details and numbers. It was extremely funny and any moment one expected the French gendarme from ‘Allo ‘Allo to pop up with a ‘Good Moaning’. It shows that there is nothing really new in theatrical comedy it’s all just about “keeping it fresh”.

The evening rounded off with three songs. The first was Whatever Happened to Him sung by Adam Pollington, Clive Tibbits and Alastair Ross, a dissection of the Raj – three old buffers gossiping in a club. It was written while Coward was on tour in India entertaining the troops and being escorted by a Major Umfreville, “a jolly pukkah Sahib” and an ADC to Lord Mountbatten. Some of the sharpness was lost here – Coward is at his most waspish and it needed more bite. (this was Thursday performance – it got better as the week went on)

Gill Lambourn followed with a tour-de-force as a delightfully sozzled old flapper singing I Went to Marvellous Party. And then the company finished with I’ll See you Again from Bitter Sweet, a 1929 operetta by Coward. Sung strongly it was a fitting end to a wonderful evening.

Coward’s writing went out of fashion for a while though it is now firmly established in the theatrical canon and this glimpse at some of his lighter pieces shows why. He writes with such intelligence and perception – combining the sting of satire with an affectionate understanding of human frailty.

The show was well paced and balanced, ably supported by musicians Barry Prichard, John Mitchell and Nick Handle. The setting was simple but effective – though the white backdrop with rather flat lighting undermined the atmosphere a little. It played to a packed house on the first night, being sold out otherwise. A successful and extremely entertaining evening!