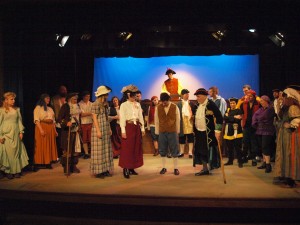 With so many AmDram Societies churning out the usual bean-stalking, washer-womaning, slap-sticking, Mother Goosery, it was a relief to find Shepperton Players delivering something other than traditional Pantomime , a piece free of well-worn plots and stock characters, but which still retains the best of the spirit of that genre : tongue-in-cheek escapades, mock heroics, sing-along songs, audience participation (including the memorable tug of war), and even the occasional topical reference (e.g. the scripted reference to untrustworthy MPs and the unscripted addition about Euros).

With such a sizeable cast, many regular members of the Shepperton Players plus some newcomers had a chance to let their hair down and their acting hackles up, as they set out to shiver our timbers, swash our buckles, and heave-ho us into an evening of good clean fun. This is, to use a dated but spot-on adjective used by the delightful Miss Livesley, a spiffing yarn. And those female pirates – dare I call them piratesses?-  are living proof that Kipling was right that “the female of the species is more deadly than the male”.

Gill Lambourne as Director gave us an explosive opening as a seemingly endless stream of dubious characters burst into the Shipwrights Arms, and it was in this setting that we also met most of the leading characters.

Jim Hawkins was a difficult role to play, at times strongly assertive (as when he calls the roistering rabble to order in the opening scene), at others an innocent abroad, uncertain, and indecisive. Tom Fidler – a newcomer to Shepperton Players I think – made a fair fist in this role, and I look forward to seeing more of his stage work as he adds to his experience.

As Lady Jacqueline Trelawny, Sally Penman, the erstwhile hapless Geraldine Barclay and evil Mrs Lovatt, now became a goodie, taking charge of everything and making things happen, albeit with an ever-ready musket. She seldom walked about on stage: she strode. This was a convincing performance, as was that of Fran Kitch as her side-kick Lucy Livesey, caught up in events beyond her control (as was her Myrtle) – and even beyond her comprehension – and going around in rose-coloured glasses obsessed with rare butterflies.

In the inset scene set in Jim’s childhood home, we met three other major figures, all larger than life, two of whom did not survive the scene. Geoff Buckingham conveyed the justified terror felt by Billy Bones so powerfully that I felt it in my own bones, or at least by a tingle up my spine. Keith Doyle as Blind Pugh was as convincingly blind as was Steve Lewis as John Mortimer’s blind father. Only Louis Whittle’s portrayal of Black Dog fell a little short of my hopes. Described as “a dangerous lunatic more hound than human”, he did span both, but could usefully have upped the canine element with more snarling, baring of teeth, and, dare I imagine, propping up his leg in a dark corner.

With Billy Bones and Blind Pugh dispatched to whatever treasures they might imagine finding in Hell, we were back live in the Shipwrights Arms ready to encounter other major figures. Peter Smith, the stiff-necked Pastor Manders, was again good as a stiff-necked character, the impeccably dressed Captain Smollett, titular Commander of an expedition which was in reality led and controlled by Lady Trelawny. His rejection of  a dying kiss by Ryan McAndrews Hardy was a moment to savour.

Steve Lewis filled the important role of Long John Silver to a T, manipulating himself around on one leg and manipulating everyone else to his will. At the same time, Alex Anderson was skillfully manipulating his parrot “Captain Flint”, though – very appropriately – it often seemed that the parrot was manipulating Alex as she followed it around on the lightest of feet. Congratulations to both of them!

There were many characters encountered in the Shipwrights Arms, each distinguished by name, dress (thank you Pat Champion), and language, but at this point I will comment only on their ensemble work, movement about the stage which was excellent, and chorusing most of which was rather good.

With some strong individual performances, and good ensemble work, I should have found Act 1 more satisfying than I did. The whole was lesser that the parts. This production was not quite as delightful as the one I experienced in my head when I first read the script. As the cast left the Shipwrights Arms and the audience headed for the interval, I was busy trying to work out what was not quite right. Maybe my expectations of Shepperton Players were now too high. Maybe the cast was tiring after their matinee performance. But my wife and I came to the same conclusion: Act 1 did not move smoothly enough; there were occasional stumbling, fleeting hesitations, resulting in a slight jerkiness. As a result the play had lost some of the momentum with which it had started. How would the cast fare in Act 2?

The answer soon came: far, far better. The cast seemed to get their second wind just as the winds filled the sails of the Hispaniola and set her on her way to the Virgin Islands (which I happen to know well, and where the original Dead Mans Chest is located). The on-board set – complete with ship’s wheel and trap door) – was just right (well done Andrew Hellicar and others). And now the action gathered and maintained pace as the skullduggery the audience knew about all along came to light. In fast-moving  events Fortune favoured one side then another. For me there were three highlights.

Firstly how that wretched parrot’s repeated and increasingly insistent words “in the barrel” are ignored by all and sundry. Secondly the fight, brilliantly staged: seeming chaos but obviously carefully planned and choreographed. Finally the masterly performance of Clive Tibbits as the obsessive – and dare I say cheesy? –  Benn Gunn.

Although I wrote earlier that there were too may minor characters for me to comment individually on each one, there are a few who I simply must mention.

Roland Fahey’s Old Joe was a gem.  Emma Dow gave the lie to all those pirates who had decried Nightingale Nell’s singing voice by giving a delightful rendition of “Blow the Wind Southerly”. But above all Lorna Doyle was forever unforgettable as Cheng I Sao, a tight bundle of pure energy and potential violence, whose every movement seemed straight out of a martial arts manual. Terrifying!

It was good at the end to see Jim Hawkins firmly in charge with the order “Clap Silver in irons” Right prevails, just as it should. I left the theatre buoyed up, an appropriate word for an adventure on the high seas.