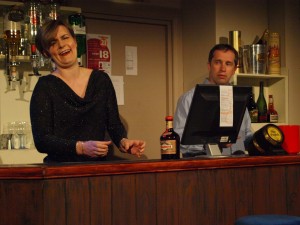 This play, exploring as it does so many manifestations of couple-ness– the poignant, the wickedly comic, even the tragic – needs firm direction if it is to hold together and to be experienced as having a unity. This direction it receives in full measure from Emma Dow. Emma ensures all the necessary changes of pace, establishes the varying tones, and manages the exits and entrances with consummate skill.

The decision to present the play in the Studio was exactly right : the intimacy of a pub could not have been achieved as fully on the main stage. So was the decision not to limit the cast to two as in the original productions, but to draw on a wider range of actors given that they all delivered good performances, albeit only the two principals having to sustain their roles for the whole length of the play. The others put in brief – though intense – appearances on which they could focus all their skills and effort.

Howard Tame, most memorable as poor Stanley in The Birthday Party, transformed himself perfectly into the central role of Landlord, a pub-owning Northern ‘cheeky chappie’ with an alleged obsession with money. This was a stalwart performance, above all in his interaction with Sally Penman in the other central role, that of Landlady.

Sally’s versatility is impressive, here playing a feisty, hard-nosed, Northern pub landlady, a graceless Gracie Fields and incipient alcoholic, who could well find a job in The Rovers Return. An impressive performance.

The couple’s constant bickering, sniping, and worse, interspersed with smiling exchanges with punters, seen and unseen, was lethal, and central to the play. The stripping away of their defensive shells in the final scene was moving enough almost to bring tears to the eyes of the most hard-bitten critic. I have heard many stage screams, but most are just that, stage screams, in which the actor seems to hold something back. Seldom have I encountered such a full-throated and convincing scream as that which Sally let rip in that last scene. Such confidence, and so justified.

I went through the credits to seek the name of a dialect coach, but found none. Even without such help, the whole cast succeeded in leaving Surrey voices well behind them.

The monologue by Judith Hopkins playing a stiff-limbed Old Woman escaping briefly from a desperate life caring for a very sick husband, commanded all our attention by her slow, quiet, poignant delivery, enhanced by a well-judged change in the lighting. Judith richly deserved the immediate spontaneous applause given by the Saturday night audience.

EnterAdam Pollington, the outrageously flirtatious, skirt-chasing Moth with what must be the world’s most noxious chat-up lines. This is a wickedly comic figure from whom Adam extracted even more fun than was in the script as his eyes constantly ranged around for other female prey. Adam nearly brought the house down.

Moth was briefly interrupted by the arrival of his regular “bleeding bird”, the gormless Maudie played by Francesca Kitch who knew she was being exploited by Moth but kept letting it happen. When Moth started dancing – if that’s what one can call his crazy cavorting – and seemed to put his back out, I for one felt pleased that he had somehow got his comeuppance, becoming dependant on Maudie. But when she left him, and he called after her “marry me”, Maudie was back to her old subservience, and the way she hurtled back and swooned into his arms was as comic as anything Moth had come up with. He’ll never marry her though, will he?

When Fran returned in a later episode playing the part of ‘The Other Woman’, she was hardly recognisable as the same actor. Quite an achievement.

Roland Fahey gave a spell-binding performance as the Old Man, still part of a married couple despite the death of his wife, now full of home-spun philosophy. Again the lighting added to the focus, and Roland’s slow-paced delivery spoke volumes.

Next to arrive were Mr. Igor – Alex Williams – and his wife – Tori Reilly, with a passionate hymn in praise of big strong men, and dismissal of her husband whom she calls at various times “pathetic”, “dinky”, “my detailed little man” and “my compact chap”, asking whether he is a man or a mouse and answering her own question with a series of squeaks.

It seems a strange piece of casting to have such a bulky man playing the role of her husband, though Alex did his level best to show that what his wife calls “weediness” is more to do with behaviour than stature. And even a worm can turn as this one does next time he heads for the bar. Here is a couple who eventually shows that love can lie under the surface in many seemingly fractious relationships, foreshadowing the final scene.

In a quick return, Tori Reilly is no longer the dominant partner but the sad, downtrodden Lesley, her eyes glued to the ground, a wife who needs the permission of her domineering, violent, jealous, partner even to go to the loo. Tori inhabited that role as convincingly as she did that of Mrs. Igor, while Jack Masters, a former Earp in Wild Wild Women, made Roy into one of those only too real – chillingly real men who figure in some women’s lives.

Then it’s time for Robert Johnson as the patient Fred – and Olwen Holme as Alice, previously detained in a psychiatric hospital, a woman addicted to television, old westerns, and Elvis Presley. When she bursts memorably into song – if you could call such a tuneless ear-shattering sound ‘singing’ – “Are you lonesome tonight”, Fred still holds on to his patience and the audience could weep – with laughing. Again, though, love breaks through.

Francesca Kitch is then back, now as the ‘Other Woman’, a sexy lady beginning to go to seed, and slightly drunk. Determined to have it out then and there with her lover and his wife, she fails to find them and contents herself with one of Jim Cartwright’s delightful monologues which she performs with frustrated gusto.

Finally there’s the Boy, another strange piece of casting, Louis Whittle, surely too old to have been left outside the pub with pop and crisps. Louis acts manfully (maybe an unfortunate word) to lop years off his age and size, and does so with some success. When he spots his father, just one more of the many characters others see but who remain invisible to the audience, his response is a delight. Meanwhile he has brought out the Landlady’s frustrated mothering instinct which leads us, still all innocent, into that final terrifying denouement in which the Landlady’s face initially turns to stone and she becomes almost catatonic before bursting out with the truth. Here we learn about the past tragedy which has ended many a marriage, one in which a couple seem unable to talk about their shared grief, and one which explains so much about the brittle interaction between this landlord and landlady which has punctuated this play.

These days, says the Landlord in that final scene, their relationship, is all “Hate, hate for sure”, but the last words of the play are very different. We leave the theatre-cum-pub with a modicum of hope but with an abundance of delight from a remarkable production.

The number of skilled new actors augers well for this already gifted Society.