Two one-act plays – Chinamen and Don’t Blame It On The Boots: July 2015 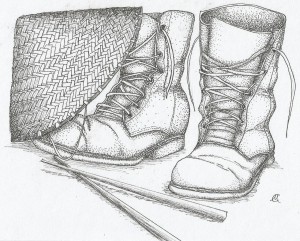 It is always a pleasure to come back to Shepperton if only to meet up with all my friends, but if a good evening of theatre is thrown in, that makes it even better. So Saturday was a good night for me.

Selling 1 Act plays is never easy so it is a good idea to mount them in the Studio where capacity is small and I was glad to find a pretty full house for this performance. Staging in the Studio however is not so easy and having to have sets that are essentially entirely temporary and moveable doesn’t help. There were some creative ideas used here that enabled the scenes to change completely and quickly, so well done. I liked the way the various doors had been done for Chinamen although the canvas stage sets viewed up close in the studio can never be totally convincing and certainly needed another coat of paint as coverage was a little patchy and missing altogether from the edges of the doors which were left untouched by either the green or white paint. On stage with more distance they would have been acceptable and also no doubt would have had better support to hold them still. But I did feel that the audience was a little short changed as they looked rather last minute giving a “that’ll do it’s only the studio” impression. For Blame it on the Boots the set underwent several changes to demonstrate change of location and time and these were done efficiently by the stage crew. If you repeat this for the festival it’s probably worth making them each two flats wide as one width was only just sufficient even on this tiny acting space. The props basket worked well and I know Red Papers had been painted on for my production, but think it could and should have been removed. Again it made me feel a bit as though it had been got out and utilised at last minute rather than made to look right for this particular production. I know I got a comp but everyone else pays full price and deserves as much effort as you’d put in for a play on the stage. The chances are of course that shortages of time and workers were the causes which I do understand. Just something to bear in mind.

The costumes on the other hand appeared to have had as much forethought as ever and were well thought out for every character. So big well done to Chantal. I liked the hippy outfit although if possible should you decide to repeat this for the festival I suspect a brown wig might make Sophie look more masculine. I do realise though that cost is a factor and if you’ve already forked out for the red one…….

Lighting and sound for both plays was reasonable minimal, not because of lack of equipment or expertise but because neither called for anything challenging. I know both Stephen and Rachel are more than capable and everything required happened correctly and on time. Wonder if some music coming from the sitting room when the door opened on the unseen visitors might be worth a try? Possibly even a toilet flushing at appropriate time? No idea if dialogue permits and it would of course need to come from correct side of the stage so maybe not something for a festival. Finally the artwork for the poster/programme was excellent as ever Carrie.

So to the plays, direction and performances.

Firstly Chinamen.  This was new to me and Michael Frayn is a top writer. The premise works well. Howard and Sophie both had convincing accents in all the roles. They were consistent even when Howard had to have dialogue with himself which is quite challenging.  Talking to nonexistent characters through an open door is not easy and for the most part was very well done. Once or twice it was a little rushed or the door held at a slightly strange angle – I guess this was due to sight lines and the closeness of the audience so forgivable. Sophie’s Scottish accent was impeccable, not surprising with her family connections but still impressive. As a man she started off with a convincing delivery, but did just let her tone rise a little on occasions later. It’s not easy and I only mention it as something to think about if the festival calls.  I would also think maybe the change of e eating plans dialogue at the end ran a little too smooth and quickly. It gave me the feeling of well learned lines rather than sudden totally new thoughts. Again small and simple to fix.  Regarding the direction. I would never have a table flat on centrally positioned with the window immediately behind it. You could create more interesting moves and positions for the actors if it were diagonally placed and the window more to one side. I think the size of the acting space probably dictated this but worth considering for future. Overall I enjoyed this. It moved along at good pace and with good energy. Having the stage crew hands appear at the end was fun.

Now to Blame it on The Boots. I did slightly know this script as I’d read it once when searching for a play to direct myself. Whilst the dialogue and characters are good I think it is based on very stereotyped ideas of am-dram. Silly things like being at the stage of rehearsal depicted for Ophelia, discussing the acting technique and one particular speech with just eight days to go is totally unrealistic.  The character of the director also and the fact that Ophelia and the Ghost are sharing a dressing room alone. But maybe that’s only a problem if you know how things really work. I just feel as a play it isn’t believable – but that’s just a personal opinion.

The acting was uniformly very good. I saw Shayla last year in Interior Designs (I think it was) and thought she was excellent and she was just as good this time. Anne of course we know is always wonderful and her portrayal was lovely. Olwen, even though I didn’t believe in the part Nick Warburton had written, did a really good job with it having the voice and look exactly as the role demanded. Robert obviously enjoyed being the rather sleazy, leering chap and came across very well. Maybe we needed to see a little more affection between him and the Liz at the beginning of the play but I can’t remember whether the script allowed for that or not, so don’t blame the director or actors for the lack of it. Peter’s direction was sound although the play doesn’t demand anything particularly original or exciting but the movement and general staging was fine. In my opinion this is not the best script in the world by a long way  but you did a good job, I just think such a quality quartet of actors could do something special with a better play as a basis. I’m not certain how this particular script was selected and apologies if I have inadvertently insulted someone’s literary taste and it’s quite possible other people would love it. I don’t want to be unkind or unfair and you all did great job. Do give it another outing for the festival as you’ve put in lots of good work in all areas. Feel free to tell me if the adjudicator heaps praise on the script – each to their own.

I only mention my small gripes as I think there’s no point having a review that just says darlings you were all wonderful. I had a lovely evening with Shepperton Players.  I look forward to next time. You have great group of people. By the way, I know Marion wasn’t in the prog but did more than fair share so well done to her and indeed to everyone.