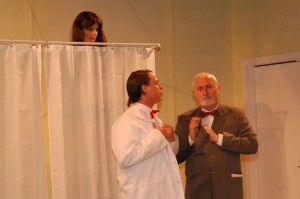 The chase is on, and libidos run rampant, in this breakneck comedy of licensed insanity. From the moment when Dr Prentice – a psychoanalyst interviewing a prospective secretary – instructs her to undress, his world is destined to change forever. The plot of ‘What the Butler Saw’ contains enough twists and turns, mishaps and changes of fortune, coincidences and lunatic logic to furnish three or four conventional comedies.

Dr Prentice’s increasingly desperate and ultimately doomed attempts to cover up his indiscretions can only lead him into trouble… and it is difficult to know who will get him first – the government inspector, his wife or a very confused policeman (in a dress). Poor Geraldine and Nicholas are just caught in the middle – sometimes in each others clothes, and sometimes without many clothes at all.

Hailed as a modern comedy every bit as good as Wilde’s The Importance of Being Earnest, Orton’s play is regularly produced, read and studied. ‘What the Butler Saw’ was Orton’s final play before his tragic death in 1967, at the height of his career.

The cast of this SP production gave some nice performances on the night I attended and the set was once again well concepted. Maybe it is me but I just don’t find this play sufficiently funny. I enjoy a good farce but some of the situations are painful – the scene with the roses for instance. Differences in the measurements of the cast meant that changing costumes convincingly just wasn’t possible.

The stage of the Riverside Arts Centre was transformed into the psychiatrist surgery of Dr Prentice. The room was tastefully decorated in yellow with table and chairs, bed, three doors for entrances and exits and of course 60’s music to give us a flavour of the period.

What the Butler Saw by the controversial Joe Orton strikes me as a potentially funny play if performed exquisitely. Whilst this production entertained, it never really tickled as farces should. In reality, I don’t blame in any way your Director Steve Lewis, there are some extremely awkward situations in the play which require timing and fantastic acting ability to be even remotely convincing. I refer particularly to the roses and the praying etc which were at best awkward.

Pace is so important in a play of this nature. It is keeping the pace and intensity going for two hours which will ultimately build the humour for the cast of six. Whilst the endeavour was in abundance, the intensity was lacking in places.

A mere forty years on, this play is already looking dated in terms of attitudes and slapstick humour. As Steve mentions in his Director’s Notes, the gags that were common place then would now be deemed offensive, sexist, prejudiced, ageist and many other derogatives. Slapstick humour is difficult to deliver well and that is where the pace, the time and the delivery are so crucial.

Visual comedy was very much to the fore in this production. Scantilly clant ladies, a cross dressing bellboy and a policeman caught with his trousers down. The differences in size among the cast made costume changes largely unconvincing but it didn’t really matter as the situations they found themselves in were suitably preposterous.

I have written a few notes on the cast members who were all hard working (in programme order);

Dr Prentice – Crispin Shingler – I thought Crispin gave a sound performance as the agitated doctor who was getting pulled around from pillar to post. Perhaps a slight tendency to underplay his dialogue – there were times when I really wanted him to lose it – but I can understand why Crispin didn’t given the absurdity of his situation. Crispin reminded me of the successful actor Philip Franks best known as ‘Charlie’ from ‘The Darling Buds of May’.

Geraldine Barclay – Sally Penman – A fresh face for the society – Sally was convincing as the potential receptionist who, in a rather obscure situation, is asked to undress behind a screen. It can’t be easy spending most of the performance scantily clad but Sally survived the experience.

Mrs Prentice – Katherine Lewis – This was a nice role for Katherine to play if a little bit bitchy but it gave her a chance to display her pins.

Nicholas Beckett – Phil Milne – Self-respect goes right out of the window in comedies and in particular farces. Phil got the raw end of the stick by putting on a women’s dress but it did give some hilarity.

Dr Rance – Steve Lewis – Steve has a nice stage manner and his bureaucratic character was confusing the matter more than we could cope with.

Sergeant Match – James Wallis – James was another new face as the bumbling policeman. I look forward to seeing him in future roles.

Thanks to Steve Lewis for pulling together an entertaining evening despite what you were up against in terms of content and hopefully your cast will have been able to get some personal artistic success out of the show.