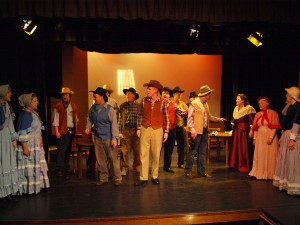 Shepperton Players treated us to a highly entertaining evening of drama, song and dance set in the Wild West. A racy plot, and crisp witty dialogue, is teamed up with tuneful music, itself often witty.

As Director, Gill Lambourn gave us a fast-paced evening which gave full scope for all the wit, and successfully held together a far larger cast – 23 in number – that Shepperton Players are used to, with many of their regular lead actors reinforced by newcomers of talent. There were no notably weak performances; given the large cast I can only comment individually on a few of the strong ones.

The evening opened with a stalwart performance by Emma Dow in the role of Alice Tibbs, proprietor of the violent Peaceful Haven Saloon, a role which held the whole disparate story-line together, much as Emma had done so successfully as the MC and Cook in the Canterbury Tales.

Clive Tibbits gave an equally stalwart performance as the doubly-frustrated Hanging Judge West, frustrated initially by the fact that killers kept getting themselves bumped off before he could get his hands on them, and later because, like all then other men, he could not get his hands on his wife.  In a nicely judged performance, Clive came over both as weak and yet just about strong enough so that, in the face of the wives’ non-industrial action, he could hold the warring men together. This rip-roarin’ combination of men was played well by Alistair Ross, Ron Millinger, and Eric Champion, plus the unwed multi-function Peter Smith as cowboy, Friar, and (especially memorable) comic drunk. Their Dancing Backwards routine, in which they were joined by assorted Earps, nearly brought the house down.

Lorna Doyle produced a memorable performance as the diminutive Sister Priscilla, truly a bundle of the joy she preached – and of energy, a force to be reckoned with, a reckless, wide-eyed innocent abroad. Her facial expressions were ever changing delights, and her death deeply comic (‘You’re not going to die’ meeting the determined riposte ‘O yes I am’). I was devastated to see such a talented performer depart so early in Act 1, but joyful when she reappeared with halo and wings, a rich addition to the heavenly host.

An equally memorable performance came from newcomer Maggs Latter as Lola, Madam of the Red Candle Bordello, and it was right that she shared curtain call with Lorna. Maggs’ richly-enunciated, razor-sharp, and outrageous French accent – every bit as authentic as any in ‘Allo ‘Allo – was to be treasured, and her body language to be admired. One mark of a good actor is, of course, how they behave on stage when the attention of the audience is not primarily on them. In this respect Maggs scored highly. While the Romeo and Juliet ballad was being played out centre stage, she sat at the side, her neck and spine firmly upright – then, as she gradually reacted to the tale, letting her head slip gently sideways, next drooping her shoulders until at the conclusion she wept. Maggs Latter. Remember the name, and watch for it.

Sally Penman, Olwen Holme, and Doris Neville-Davies, the primly-attired wives who were persuaded to join forces with Alice Tibbs, managed to convey their suppressed sexual needs with conviction, joined half-heartedly by Francesca Kitch as the ambivalent recently-wed Myrtle, who found her husband played by Adam Pollington, well-nigh irresistible.

By contrast, the erotically attired (for those times) soiled doves –Tori Reilly, Abigail Murrell, Sue Dye, and Carrie Millinger, flaunted their blatant commercial sexuality outside their Red Candle Joint (into which we were not, wisely, invited, except in the imagination: the alleged move of their second-hand piano giving rise to many of the play’s best double-entendres).

Wyatt and the other Erks (correction, Earps) – Geoff Buckingham, Jack Masters, Louis Whittle, and Mark Woolard  – provided more of a side-show in a series of a wickedly-good comic turns.

As a son of the McLairds, and as a daughter of their feuding enemies the Clantons, newcomers Ryan McAndrew and Alex Alderson made promising debuts, and later, playing their Shakespearean counterparts Romeo and Juliet, touched not only Madam Lola but also the audience, while still extracting the comic side of things as befits this musical.

The set was appropriately simple and flexible, the lighting understated and effective, and the shooting stars, part of the special effects, brilliant.

I must make special mention of Gill Lambourn’ choreography which was one of the strong points of the evening. Although I hold to my previously held view that musicals do not play to Shepperton Players strengths, which lie more in multi-layered plots and complex characters, it is clear from the present production that, given the right choice of musical , the augmented Shepperton Players  can put on a thumpingly good musical.